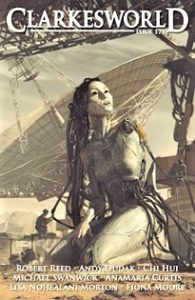 “The Island of Misfit Toys” by Fiona Moore

“The Last Days of Old Night” by Michael Swanwick

“Conversations in the Dark” by Robert Reed

“No Way Back” by Chi Hui (translated by John Chu)

“Forward Momentum and a Parallel Toss” by Anamaria Curtis

“Songs of Activation” by Andy Dudak

The December issue of Clarkesworld #171 contains six original short stories and one translation into English.

The opening piece of original fiction is “The Island of Misfit Toys” by Fiona Moore. This Christmas themed story is set in the USA, a few decades into the future. Artificial Intelligence has become cheap enough and sufficiently commonplace to be a consumable item. However, the protagonist of the story discovers that this has not led to a Golden Age of plenty for all. At the opening of this tale, our hero has been made redundant by an AI manufacturer, is homeless and has just been beaten senseless by a teenage gang, merely for the momentary excitement of the act. Random chance leads our protagonist to a dump where semi-sentient AI toys and robots have been discarded and he summons up enough of his old skills to embark on their restoration. At first sight this is merely a poignant Christmas story, but on a second reading it includes some elements disturbing to a west European liberal, including the concept that the application of a severe beating to a teenaged child can ever be justified by any level of mischievousness.

The second original offering is “Things That Happen When You Date Your Ex’s Accidentally Restored Backup from Before the Divorce” by Lisa Nohealani Morton. The title is light-hearted, but that is where the light-heartedness ends. This is a story set in a darker than average near-future in a USA that is at war with itself after a Federal leader’s coup against state democracy (obviously not anyone that any Republicans amongst the readership might know).

The story is unusually written as a second person narrative directed to our Point-of-View character. She is a member of the resistance to the Federal takeover and the spotlight of attention alternates between her developing relationship with a clone of her ex-partner and her increasing involvement with the resistance movement. The technology deployed in this counter-revolution is fascinating in its own right and makes the story genuine SF, but the key elements of the story could be applied to the past, present or future. The author sympathetically explores the essential dilemma of all resistance movements: that resistance to authority generates a response that will almost inevitably become more violent in proportion to the success of the resistance. Every person caught up in that must decide how far they are willing to go in response. Are they to be moral objectors or resistance fighters?

The third tale is “The Last Days of Old Night” by Michael Swanwick. This fantasy is set in an icy Norse world, long before Odin, Thor or Loki, even before the sun first rose to end perpetual night. The three Brothers are Old Gods, fickle, feckless and cruel. In keeping with Norse tradition, they are gods with vast powers to create, destroy and to alter reality, but are far from omnipotent. They become aware that change is coming to their world and that the first appearance of the newly emergent sun has the potential to end their capricious rule. They have already converted a female mouse into their maid-servant and now they equip her with Oracular powers to rescue them from their fate. But with her new power comes wisdom, and with wisdom comes the decision that the new world would be a better place without the Brothers. Mischling, the ex-mouse, develops a daring plan to create a new world rather than to save the old.

“Conversations in the Dark” by Robert Reed. This novelette is set upon a planet-sized starship in a far distant future. Humanity had been a latecomer to the star-spanning network of civilisations, an unremarkable race that had been eking out an existence on unclaimed low quality worlds until, in a stunning piece of good luck, humanity took possession of the derelict Great Ship and immediately became serious galactic players. Many millennia later, the Great Ship is plying the void between different space-going civilisations, under human management but carrying entire cities of aliens as passengers. When human control of the Great Ship is threatened by a power that predates even the oldest species aboard, drastic measures must be taken to restore the status quo. The author has created a believable culture in which immortality, super-advanced technologies and near-magical biological enhancements are a routine norm, yet the reader can still identify with the primary players in this drama. Then, just when the reader believes that this complex tale has reached its denouement, the author inserts another layer of complexity in the last, but not necessarily final, ending. Any reader who likes the complex world-building of Frank Herbert and the glimpses of super-advanced technology offered by Iain M Banks should try this novelette.

“No Way Back” by Chi Hui has been translated from the original Chinese by John Chu. The translation is sufficiently smooth that only a few cultural references betray the fact that this story was not originally written in English. It is set in a modernised and highly cybernetic China, about 60 years into the future. The story is told in a first person narrative from the viewpoint of a young computer hacker with a terrible secret. The author leads the reader into the virtual realities of a cross-linked worldwide net that has become so complex and massive in computing power that an entire human consciousness can be uploaded and be no more than a fractional snack to the emergent super-intelligences that lurk deep in the net. This is a poignant tale that invites one to identify and sympathise with a character who is half-villain, half-victim and wholly believable.

The next story is “Forward Momentum and a Parallel Toss” by Anamaria Curtis. This provocative piece challenges the right of big business to create monopolies based on their proprietary technology. It is set in rural America in a future that could possibly be only a decade or so away. The protagonist, Lacey, is the coach for the local high school’s robotic band. She has taken her team to a major agricultural show where regional schools compete to display their programming skills and innovation before the local farmers and exhibitors. The most important of those exhibitors are the representatives of the mighty JM Corporation, which holds practically every farmer in thrall by virtue of the fact that JM supplies both farm machinery and seeds, but that all the machines are programmed to only operate if they are using JM-supplied seed, sold at JM’s monopoly price. Lacey plans to use the show to shatter that monopoly, regardless of the legality of her action and the impact on her relationship with her long-term love-interest, a bright young fellow student who was recruited by and is now an executive for the same JM corporation that she is just about to attempt to sabotage.

The last offering is “Songs of Activation” by Andy Dudak. The location is a very unusual University at the heart of an Interstellar Empire that has endured almost unchanged for millennia. In this far future universe, there is no longer any such thing as original thought. All that can be known is already known and is stored in quantum space-time that can be accessed by the correct verbal triggers (The Songs of Activation of the title).

The Point-of-View character, Pinander, is a scholarship student from a poor and lowly world of the highly stratified and static Empire. His original aim of entry into the Imperial Civil Service is disrupted when he is exposed to the works of one of the founders whose views have been written out of history by those whose descendants now rule the Empire. The very act of knowing that an alternative viewpoint can exist is itself treason, and our protagonist finds himself forced into rebellion against the ancient and moribund Empire.

Although the mechanism of triggering stored knowledge by use of a specific set of words smacks of magic, “Songs of Activation” is written to be SF rather than fantasy. However, that only applies if the reader accepts Arthur C Clarke’s oft quoted homily that any sufficiently advanced technology would be indistinguishable by lesser beings (that is us) from what we would call magic.