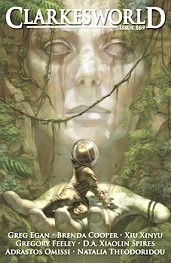 “Callme and Mink” by Brenda Cooper

“You and Whose Army?” by Greg Egan

“All Living Creation” by Xiu Xinyu

“Ashes Under Uricon” by Adrastos Omissi

The title of “Callme and Mink” by Brenda Cooper refers to the names of two dogs living with a robot in the form of a woman. Her function is to train canines to be companions and guardians, as well as to teach humans how to care for the animals. The setting is a future world of highly advanced technology, but one in which an unspecified disaster leads to nearly deserted communities and people struggling to live off the land. The plot involves a family seeking a pet for a young girl wasting away from disease.

The author avoids giving the robot inappropriately human emotions, while still making her an engaging character. The story is a poignant one, without the need for villains or melodramatic elements.

Another robot in the shape of a woman appears in “To Set at Twilight In a Land of Reeds” by Natalia Theodoridou. The narrator makes regular maintenance trips to the machine at an automated farm. After the death of her lover, the narrator visits the robot for the last time, providing her with new skin, assisting her in a major repair job, and joining her in mourning for a worker robot.

Unlike the machine in the first story, this robot is very human in her emotions. She tells an allegorical fable to the less sophisticated worker robots, which they seem to appreciate. (The enigmatic title comes from an image in this story within the story.) Her relationship with the other machines, which are not at all human in appearance, is the most interesting aspect of the plot. In other ways, this gently melancholy tale may seem overly sentimental.

“Wandering Rocks” by Gregory Feeley takes place on a small moon of Neptune. Before the story begins, rebels fled a large spaceship, taking the vessel’s smaller ships and hiding out among the planet’s satellites. The protagonist, like the rebels, was born on the ship. He accepts an assignment to take one of the few remaining small ships to the moon Thalassa, in search of the rebels. He doesn’t realize that the artificial intelligences inhabiting the vessels, large and small, have plans of their own.

The author’s portrait of Neptune and its satellites creates a true sense of wonder, evoking the sublime beauty of outer space. The plot is less effective, with the nature and motivation of the artificial intelligences left unexplained. They seem to be something other than just the computers that run the ships, but this is never made clear.

In “You and Whose Army?” by Greg Egan, four brothers, given illegal brain implants as children, are able to share their memories with each other. The story begins when one of the young men cuts off all mental communication with the others and vanishes. The remaining three track him down and learn the reason for his disappearance.

Combining a detective story with neurological speculation and a character study of the missing man, this is a complex, sophisticated tale. The technology of the near future is convincing, as is the psychology of the brothers. The ending adds an unexpected but believable twist to the motivation behind the disappearance, revealing deeper aspects of the brother’s personality.

After the death of her mother, the narrator of “Last Wishes” by D.A. Xiaolin Spires carries her ashes, hidden on her body under artificial skin, as well as an elaborate urn, to her final resting place. The urn is a high-tech device, projecting holographic images when one touches its surface. It also contains a puzzle, designed by the narrator’s riddle-loving mother, which she must solve before the mourning period is over.

The story is full of colorful and imaginative images, as well as unusual technology.

The way in which the narrator uncovers the secret of the urn is arbitrary, depending more on luck and coincidence than intelligence.

In “All Living Creation” by Xiu Xinyu, translated from Chinese by Elizabeth Hanlon, people wear protective membranes over their bodies to prevent the theft of their genetic information. The narrator’s sister rebels against this restriction, offering her information freely. This leads to a large number of clones working as servants and prostitutes, a revolt by the clones, and their eventual fate at the hands of the narrator.

The story consists of many small sections of narrative, often jumping back and forth in time. The plot is an interesting one, but the structure makes it difficult to follow. The narrator’s secret work developing biological weapons adds a melodramatic touch.

In “Ashes Under Uricon” by Adrastos Omissi, automated war machines stalk the Earth, eliminating most of humanity. The protagonist wanders through a deserted Europe. She finds a house with a beautiful garden, but an interior containing only skeletons. The garden is the work of a maintenance robot. The ending reveals the main character’s nature and motive.

The effect of this story depends greatly on readers’ expectations. Those who predict the final revelation may find it anticlimactic. Although there is little plot, the author creates striking images of a world bereft of people.

Victoria Silverwolf notes that the title of the last story comes from a poem by A. E. Housman.