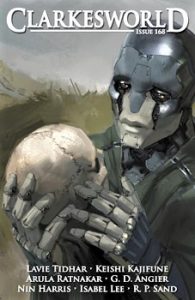 “What Remains of Maya Sankovy” by G. D. Angier

“Lone Puppeteer of a Sleeping City” by Arula Ratnakar

“Every Plumage, Every Beak” by Nin Harris

“The Book Reader” by Keishi Kajifune

Half a dozen science fiction stories appear in the latest issue of Neil Clarke’s on-line publication, with a tale of fantasy to offer a bit of variety.

“Blue And Blue And Blue And Pink” by Lavie Tidhar features pilots who illegally transport supplies into a region ravaged by a mysterious illness, in exchange for valuables. During one such mission, the protagonist experiences the strange effects of the plague, with devastating consequences.

The bulk of the story is written in a laconic, realistic style, much like a work of hardboiled adventure fiction. This contrasts strongly with the surreal and deceptively friendly-seeming nature of the hallucinatory menace. The author performs the difficult task of balancing these two aspects of the story with a sure hand. What might have been dismissed as maudlin is transformed into something subtly frightening.

The narrator of “What Remains of Maya Sankovy” by G. D. Angier is one of several nearly identical beings combining robotic bodies with organic brains. Memories of human beings were implanted in their minds, giving them a touch of individuality. In particular, the narrator becomes more separated from others of the same kind as the story goes on.

The setting is a colony world, inhabited by a small number of adults and several embryos, newly arrived on a starship. As the embryos grow into children, the narrator becomes emotionally attached to one. The strange biology of the planet’s coral-like ocean dwellers leads to a climax both tragic and hopeful.

The concept of partly biological machines with human memories is original and interesting. The notion of a starship fleeing a dying Earth in order to populate another world is more familiar. The biology of the alien planet is intriguing. It starts off like something from a science fiction horror movie, but later becomes much more benign, if overly mystical.

“Lone Puppeteer of a Sleeping City” by Arula Ratnakar takes place inside one of many domed communities, protecting its inhabitants from the deadly environment outside. The minds of the city dwellers are to be placed inside of machines that will repair the damaged outside world. While this work goes on, the consciousness of each person will experience virtual reality dreams.

The main character is the artificial intelligence in charge of creating these imaginary lives. It becomes friends with a young girl who prematurely enters a VR realm of her own. This prevents her from joining the other citizens in their dream worlds, so she must leave the city and the AI she loves. The AI creates a reality that they can share together forever.

This basic outline provides only a glimpse of a very dense story with a complex background. The author displays great imagination and intelligence in the creation of a future world utterly distinct from our own. Some aspects of the story, such as the existence of people with brains engineered to work in ways different from unmodified ones, are fascinating, but bear little relevance to the plot.

Sections of the narrative are labeled as A, S, C, I, and I, an obvious reference to the ASCII computer code. There are also sections labeled with long strings of binary numerals. These allusions to modern computer science are both overly clever and inappropriate for a story set in a future with much more advanced machine intelligence.

In “Certainty” by Isabel Lee, a gigantic supercomputer is able to provide exact information on any event that took place in the past, and any that will occur in the future. This infallible accuracy is based on the notion that the universe was completely predetermined from its beginning, without the true randomness required by modern quantum theory. The device allows a man to witness the accidental death of his lover, which took place while he was away.

The story is told from the point of view of the man’s assistant, who becomes infatuated with a woman who works at the huge lab complex where the supercomputer is located. The implication is that they cannot become lovers, because their futures are already determined for them.

The author considers the age-old question of free will and predetermination, based on questionable physics. The characters are appealing, and the mood of the story is calm and slightly melancholy. The narration is in second person, with the viewpoint character always addressed as “you.” This technique adds little to the story, although otherwise it is quite well written.

(It may be of interest to some readers that this tale contains a subtle allusion to the famous story “The Library of Babel” by Jorge Luis Borges. However, the incredibly vast library imagined by Borges contains far more meaningless and false books than true ones, while the computer in this story only produces true versions of the past, present, and future.)

“Ask the Fireflies” by R. P. Sand is narrated by an artificial intelligence designed to monitor the health of a child living on an extraterrestrial mining world. Its functions grow far beyond that, and it becomes the girl’s companion in her virtual reality fantasy world. When a brain injury sends the child into an irreversible coma, the AI tries to find a way to save her life.

The author writes from the point of view of a machine in a convincing way. The AI’s perception of human beings is disorienting at first, but becomes clearer later. The presence of aliens in the story serves no real purpose. The story’s ending, although emotionally effective, strains credibility.

“Every Plumage, Every Beak” by Nin Harris takes place in a fantastic world full of supernatural beings, some in the form of animals. (The story is full of words that may not be familiar to many readers. A little research reveals that many of these are taken from Indian, Malay, and Indonesian culture.) A bird-like being acts as an aide to a more human creature, but refuses to carry her aloft in a chariot. They go their separate ways, and both become involved in the internecine wars of a god-like Empress.

The story has an exotic, dream-like flavor. The presence of technology, in the form of rifles, goggles, blowtorches, and even a sort of rocket, adds a touch of steampunk. This combination of mythology and machinery is not always completely successful. The last part of the story takes place many years after the earlier sections, and serves as an anticlimax.

“The Book Reader” by Keishi Kajifune, translated from Japanese by Toshiya Kamei, is a brief tale in which nanotechnology, placed inside the body, replaces traditional forms of education. Some people are immune to the devices, so they are the only ones able to read physical books. They are also sought by the military, who hope to transfer their immunity to soldiers, in order to make use of nanotechnology as a psychological weapon.

The story is narrated by a student who becomes friends with a girl who is immune. As enemy nanotechnology creates frightening illusions throughout the city, she shares her protection from them with the narrator.

The setting is a dystopian world where fiction is forbidden to young people, so that they will not develop their imaginations. Reminiscent of Ray Bradbury’s classic novel Fahrenheit 451, this aspect of the story will appeal to anyone who loves tales of the fantastic. In other ways, it may seem thin and underdeveloped.

Victoria Silverwolf has been seeing young deer near her house recently.