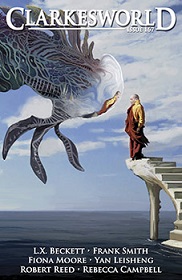 “The Lori” by Fiona Moore

“Drawing Lines Between the Stars” by Frank Smith

“The Plague” by Yan Leisheng (translated by Andy Dudak)

“An Important Failure” by Rebecca Campbell

“The Immolation of Kev Magee” by L. X. Beckett

“Nameless He” by Robert Reed

The 167th issue of Clarkesworld contains six stories, including three novelettes. All the stories in this issue were a pleasure to read.

“The Lori” by Fiona Moore

This science fiction short is set in a near future where Cooper is the driver of a sentient tank. He is wounded during a jungle battle and recovering in a hospital when he discovers the authorities never found his tank. Could it have survived?

Returning to the battle site in Malaysia, Cooper hears of a strange truck-like apparition in the jungle. What the locals call the Lori. When Cooper finds the Lori, he discovers it is his old sentient tank. But though the Lori recognizes him, it now follows a mysterious code of conduct. One that Cooper has deep concerns over.

This was an interesting story with engaging prose. It was a pleasure to read.

“Drawing Lines Between the Stars” by Frank Smith

A solar glider has broken down near the asteroid belt in this SF short. A passing cargo ship comes to its rescue, capturing and placing the small spacecraft in the loading dock for repairs.

As the cargo ship’s chief engineer, Bex, repairs the solar glider, he overlooks an important repair, a mistake that has long-reaching consequences for him and the solar glider’s sole occupant.

The plot to this story moved along at a steady pace. But in the end, the story had little new to offer the SF genre.

“The Plague” by Yan Leisheng (translated by Andy Dudak)

He’s called a crow in this SF short, set in a future that’s fighting off a silicon-based plague. Dressed in a black hazmat suit he collects the infected bodies that are turning to stone, and he burns them.

The victims scream because they aren’t dead yet. But he continues collecting and burning until the leadership recognize him for his exemplary service to humanity. Then he meets a woman protecting young children petrified two years ago. And his life changes.

The author built a dark world with some interesting twists on the plague theme.

“An Important Failure” by Rebecca Campbell

A great violin is a musical treasure in this SF novelette set in a climatically challenged future. Mason loves the tone a violin prodigy pulls from a famous violin she is loaned for three years. It inspires him to decide to build his own great violin for the young girl.

But the climatic changes mean the rainforest exists only in history and temperate forests are mostly ashes. Finding the right wood becomes a lifelong challenge. Mason slowly creates the instrument, letting the various woods age to perfection, and making his own glues.

Despite injuries and hardships in this world of recurring natural disasters, Mason strives to build the perfect violin. But the years wear him down, and the project remains a work in progress even as the prodigy player becomes a woman and then a mother who is forced to give up her own dreams of worldwide concerts.

This character-centric plot needed time to grow on the reader. It was well worth the wait.

“The Immolation of Kev Magee” by L. X. Beckett

Breeze and Kiesha are left holding the baby in this SF novelette. The two high schoolers are babysitting little Alice when the mother runs off in this climate ravaged future.

The teenagers struggle to find a place to care for the baby while they search for adoptive parents. They flee to the island of Kev Magee, a billionaire philanthropist working to cool down the oceans.

Soon, Breeze becomes unknowingly embroiled in sinister plans from other billionaires. No matter their concerns, or their wish to see Alice going to a good home, Breeze continues to be the unwitting dupe in a global scheme.

The story was unnecessarily confusing and slow for the first half. Only the last third was engaging.

“Nameless He” by Robert Reed

In this SF novelette, set in a distant future, Nameless He is an AI analyzing an abandoned alien spaceship. The ship is of extreme age and found passing through the galaxy’s plane, as if coming from another galaxy.

Nameless is immortal, as are the humans with him on the Great Ship. He studies the craft for centuries, slowly gleaning information from its innards that humans cannot enter. Few of the humans seem to care that Nameless is compiling a wealth of information. But what should he do with it?

The author beset this story with mysteries that made it an intriguing read.