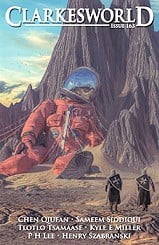 “A System for Investigating Recapitulation and Evolutionary Novelty” by Kyle E. Miller

The 163rd issue of Clarkesworld contains six stories, including two novelettes. All the stories in this issue were a pleasure to read.

This short science fiction story is set in the near future where Sarah Levy is questioning the Dark Energy theory of the stars. A struggling theoretical physics grad student, her insights propel her to fame and a Nobel Prize, but along the way she becomes estranged from her wife and son.

Eventually, a practical physicist develops a way to use her theoretical findings to develop a new space drive. And when Dr. Levy’s son volunteers to be its first test pilot, it becomes a chance to close the gap between them.

This was a well-structured story that used this new world as background to the ageless challenge of a mother’s sometimes unrequited love for her children.

In the future, Arsalan rents out his body in this SF short. Meena, an elderly woman in Karachi, will take over his body like a rental agreement, allowing her to experience Arsalan’s local scene.

Arsalan soon finds himself chided for the state of his apartment, his poor Urdu, and his lapsed devotion to Allah. But slowly they come to an understanding and Arsalan learns some fascinating lessons about getting old and a person’s indomitable spirit.

The story switched back and forth between perspectives at a dizzying and often confusing pace, which dulled the importance of the story’s ultimate purpose.

“A System for Investigating Recapitulation and Evolutionary Novelty” by Kyle E. Miller

L lives on a leaf in this bizarre SF short. She can only see whitespace beyond the one leaf she’s lived on all her life but can communicate with others living on other leaves.

When her closest friend J decides to unfriend her, L becomes distraught. Unable to engage in any meaningful interaction through the network, she starts to hear J’s lullabies. Maybe if she can find a way to sever her leaf’s stem, she can reach J once again.

The author built an interesting world, but the foreground story set against this unique backdrop was not so interesting.

A thoughtbox can be used to record a person’s thoughts in this short SF tale set in the future. Ogone is struggling with her boyfriend who uses her money and doesn’t appreciate what she does for him.

The thoughtbox he brings home is meant to remedy his inability to understand her needs and allow Ogone to understand him better. But when she realizes he deletes some of the files with his thoughts in them, Ogone becomes suspicious. Suspecting he’s having an affair; she discovers something far worse.

The plot was slow and only picked up in the last third when the story’s mysteries began to show.

Dongfang Jue, AKA Squareface, is an asteroid miner in this SF novelette. His skills require him to aid and support the women sent out from the mining camp to capture the ore-rich asteroids. His current partner, Freckles, is special to him, though they’ve never had an intimate relationship. Then, in an instant, she’s gone, killed by a freak exploding asteroid.

His next partner, Magpie, is different and Squareface finds himself unable to rid himself of the memory of Freckles. Magpie dies of a different accident in the unforgiving vacuum of space. Soon, the weight of these losses compels Squareface to seek justice against the company that sent him and the others here to mine as a way to repay their life’s debt.

But when he suggests a rebellion, the other miners disagree. And then his troubles really begin.

The story explored some interesting topics. But the prose was too slow to be a page-turner.

In this SF novelette, set in a morbid distant future, Perch is escorting Skink to a mysterious city. After the mist destroyed their home, Skink, who can control the weaves, asked him to accompany her to find an ancient library that holds many secrets.

Perch likes his companion, though she also scares him a little. But when they reach the city, he finds the weaves are everywhere. And the deathly mist lurks in the depths too.

This story was set in an imaginative world. The twists and turns kept this engaging until the end.