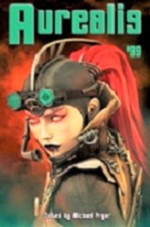 “Once Was Lost” Alan Baxter

“Regulation” by Michael Earp
“Agents of Empire” by Aaron Emmel

This issue of Aurealis brings us three science fiction stories, all of which feature advanced technology and the way it impacts upon, and changes, people’s lives.

“Once Was Lost,” by Alan Baxter, features Craig, a gun for hire who is wearing a “chameleon suit” to complete an assignment. Visions of Stuart, his dead partner, come and go, providing support and guidance from beyond the grave. The technology of the chameleon suit, which we learn Craig has been given as payment, features heavily in this story, and it’s clear that a lot of thought has gone into its creation. Personally, though, I found this piece difficult to love. Craig’s relationship with Stuart wasn’t especially believable, and I found it difficult to empathize with Craig himself. Had the focus been purely on the action and the tech, it might have been fine, but the relationship is very much front and center. It almost felt as though the two aspects of the story were battling with, rather than complementing, each other.

“Regulation,” by Michael Earp, could not be more different. Here we meet Ethan, a young boy living in a society where anyone who even thinks about carrying out an undesirable act is instantly “Regged”—short for Regulation—which means they’re vaporized on the spot. Babies, we learn, are given an R-shot at birth, and this has been accepted by the population because now there is no crime, no terrorism, no violence—everyone lives in peace. Ethan has never questioned Regulation, until his best friend, Oscar, is Regged in front of his eyes one day. This, of course, is far from the first time an SF writer has explored the idea of a government judging people based on their thoughts, but it doesn’t matter – this is a wonderful story. Ethan’s character is beautifully drawn, and his dawning realization of what is happening perfectly matches the reader’s. The ending is inevitable, yet deeply moving. This is a story that will stay with you and would, I think, make an excellent discussion piece for young adults. Highly recommended.

In “Agents of Empire,” by Aaron Emmel, we meet Gene, who is monitoring the movements of a man he believes to be an assassin on Neptune. The man turns out to be something rather different, and he’s carrying a very important briefcase. This is another example of a story covering well-worn ground—in this case time, relativity, and the question of whether we can change an established future—but sadly this piece didn’t have the impact of “Regulation.” This is a hard science fiction story, and the science and the technology are accordingly painstakingly researched and created. But I found it difficult to care very much about what was about to happen because I didn’t find the character of Gene particularly engaging. If you’re a big fan of hard SF, though, you might enjoy this more than I did.