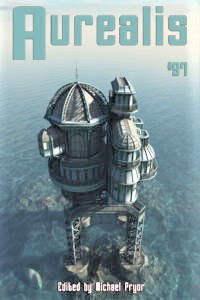 This issue of Aurealis begins with an editorial which tells us that not only are Fantasy and Science Fiction “the best,” but also that “Fantasy and SF writers have the best readers in the world.” Well, we all knew that! Seriously, Editor Michael Pryor is making the point that Fantasy and SF allows writers, and readers, to explore issues with more depth and breadth than other genres, and that’s pretty cool. So, buckle up, then – this should be a collection of very thought-provoking stories…

We start with “Hot Blood and Iron Teeth,” by Catherine Moller. The story opens with a Russian family – the Fyodorovs – getting off a delayed train in Australia. There’s a “wizened, apple-faced woman, missing teeth and hair in equal measure” at the station, and it’s not long before she lures fourteen year-old Angela and twelve year-old Nadya into the woods. This is a wonderful take on traditional fairytales, and has clearly been lovingly researched. It’s dark in places, as all the best fairytales are – the author says in her notes at the end that she aimed to convey a sense of eeriness and discomfort – but it’s lots fun to read. The story also manages to have a deeper message about cultural dislocation. My only small quibble is that there’s a plot point raised in the middle – I won’t say what it is for risk of spoilers – which to my mind isn’t quite paid-off at the end. Otherwise, though, this an excellent story and highly recommended.

“Elementability,” by Melanie Rees, begins with a family picnic and a baby’s first words. Things, however, are not as “normal” as they seem – the family appears to be on some kind of alien world and there’s something very odd indeed about that baby… The idea of children having unusual abilities and being taken from their parents as a result isn’t a new one, but I don’t think I’ve seen this particular type of ability explored before, so there is an element of novelty in this piece. Unfortunately, the story quickly degenerates into a fairly straightforward chase, with a really quite predictable ending. The characters aren’t especially well-rounded, the dialogue is really rather clunky in places, and by the end it felt like a mishmash of any number of not particularly memorable SF movies. In her notes, the author comments that the story is about disability, and says that she intended to draw parallels between the baby and the newly colonized planet. All very well, but I fear the story does fall foul of the tired “mystical disabled person” trope. It’s not terrible, but the other two pieces in this issue are, I think, superior.

“The New Life,” by Jamie Brindle, takes us into the afterlife, where a character called Rosewater is trying to explain things to The Rich Soul. We learn that what we think of as life is, in fact, merely “Level One.” It’s Rosewater’s job to move people along and up. Of course, what happens when we die is another incredibly common theme in Fantasy and SF, but this is nicely executed and refreshingly different – avoiding all the old clichés. The story quickly moves past the human soul to focus on Rosewater himself, his mysterious brother Quince and sister Silverlight, and Quince’s bumbling assistant, Bob. As I read this I did feel slightly as though I was dropping in half-way though something, and that may be because, as Brindle says in his notes, he’s written several stories about Quince before. Rosewater also appears in an upcoming novel. So these are established characters in an established world. Given that, I actually think he’s done a pretty good job of providing just about the right level of background information to make the story work, without slipping into an info-dump or leaving the reader completely confused. An enjoyable read, and I may just look out for that novel.