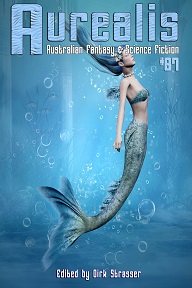 “The Root Bridges of Haemae” by Sean Monaghan

In Sean Monaghan‘s short story “The Root Bridges of Haemae” Ribolee is an Oelene, a creature with talons and double-tipped tongue, an inhabitant of Haemae, a planet fully covered by jungle and hardy trees. After she meets Abigail, a human astronaut and explorer of Ribolee’s home planet, she becomes fascinated by the fact that human females are surviving the birth of their children, while her race’s females are dying after giving birth to hundreds of children. Following the fact that her best friend Siluone is about to give birth, she will invite her human friend to this glorious – for her race – event. Abigail though, who is pregnant as well, will face some complications, which will confuse the young Oelene about the information she already has on the human visitors.

The cultural differences and the landscape description of the story are fascinating. The way two completely different characters are communicating – where the humans, this time, are the aliens – and how it is demonstrated to the reader, is also remarkable. Finishing, it left me with a satisfied smile and thoughts about how differently people behave before death.

In the combination science fiction and fantasy short story “Elven Blades,” by Ian Bell, Elves existed at some point in world history. After the discovery of a variety of Elven Artifacts, the humans wielding those items are using their extraordinary powers to either protect themselves or hunt the rest of the wielders. The protagonist, John First, is hunted by Lydia, both of them members of the first experts who discovered the artifacts. Using his Elven teleportation ring to escape his hunter, John finds himself in Japan, where he meets Steve, a war veteran and wielder of an elven blade passed along from his grandfather. After a conversation with Steve, John will decide to help the war veteran to look for a way to destroy the elven blade.

The action scenes are more than satisfying and entertaining, giving a great sense of the powers the fighters are gaining with their Elven artifacts. The background, which is successfully placed in today’s history and explained by genuine dialogue, is attention-grabbing and makes me want to read more about it. The final twist is giving the reader a promise that there is more to this story to come, and I cannot wait to read a future novel based on it.

The third, a science-horror story, “Across the White Desert” by Deborah Sheldon, takes place in the everlasting snowy landscape of Antarctica, in a spot where an unidentified flying object has landed. The Australian government will approach John Lansky, a war veteran who had an experience with aliens during his service in Vietnam, but also has a great skill in the use of a dogsled. After John accepts a great deal of money to transport a military squad to the unknown object’s landing point, he will find himself in a deadly pursuit. Once again in his lifetime, he fights against his worst nightmare; only, this time, the government he once served believes him.

High stakes and realistic dialogue create a strong sensation of endangerment, which holds the reader from page one to the end. The snow, gore, and monsters suggest that the author might be a big admirer of the Lovecraftian mythos. True or not, Deborah Sheldon has done an excellent job.