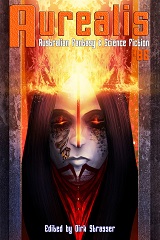 “Adrift on the Smokey Sea” by Lachlan Huddy

Milla longs for a friend in Janet Haigh’s “Potkin.” Living in a cramped, stifling house with her healer mother and unmagical brothers, Milla is a little out of place. Sure she has magic, but not the sort of magic her mother has. She can’t heal people, but she can animate the dead and inanimate. Out of sight of her mother, Milla sneaks out of the house one night to build herself a friend—a little pet of bone and pottery she calls Potkin. But as Milla follows her mother to learn the healer’s trade and Potkin grows into his own existence, Milla will learn that what you give life to isn’t necessarily yours, and what is alive doesn’t necessarily want to be.

“Potkin” has some lovely sensory description that allows the reader to fully experience the world that Haigh has created. The heavy use of adjectives gives the prose a lyrical cadence that does a fine job of enforcing the fantasy setting. The short length of the story, however, isn’t enough to support the two plots (Potkin and Alma) and Milla’s relationship with her mother as well. It takes a stretch of the reader’s imagination to connect these three conflicts within the limited word count and thus the wind is taken out of the sails in the end, and the reader is left craving a little more depth from the characters and the plot both.

Thomas and Mr. Remington are on the adventure of their lives in Lacklan Huddy’s “Adrift on the Smokey Sea.” With a map to a buried treasure in hand, the two friends face mutinous sailors, hungry sea serpents, peg-toothed mermaids, and the mysterious Smokey Sea, all for the chance to get their hands on the lost treasure of the infamous pirate Thorny Bill.

“Adrift on the Smokey Sea” is an adventure story with all the adventure stripped out. Thomas and Remington touch all the landmarks needed for a fantasy tale about buried treasure, but Thomas’s know-it-all attitude and Remington’s all too on point theories rob the story of any mystery or conflict it might have otherwise had. The plot is fueled entirely by convenience that destroys suspension of disbelief and deflates tension. Add to this an unnecessary false beginning, awkward and jolting prose, and an ending that begs to be accompanied by a sad trombone and the reader has a story that isn’t so much adrift as it is sinking to the bottom of the sea.