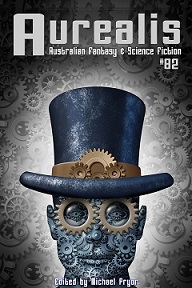 Emma, the main character in Carolyn J. Denman’s “Echoes of Space,” is the Duke of Fitzroy’s assistant. He assigns her to propagandize and tell the overcrowded population that the Next, an ephemeral substrate which occasionally abducts people, giving them either bliss or madness, is a good thing and is to be embraced. When Julian, a man who tried to save a little girl who was taken by the Next, volunteers to go into it, Emma is curious because she doesn’t believe the pap she’s been trying to sell to the populace. Julian, however, firmly believes that the Next will welcome him. When it does, Emma experiences both an epiphany and a crisis of faith. As a result, she must decide what to do with her own life. This is a well-conceived and executed story about not only the lies we tell other people, but also the falsehoods we enforce on our own psyches, and the prices we pay for our dishonesty.

C. S. McMullen gives us “The Other-Faced Lamb,” a slice-of-life tale about a post-war cult where there is one Shepherd (the only male in the group), lots of wives, and many sisters. Naturally, this is a religious cult with the man being the leader of the group and getting the best of all things, including the women. The story is told from the perspective of Selah, one of the sisters. The speculative fiction here appears of the life-after-apocalypse variety.