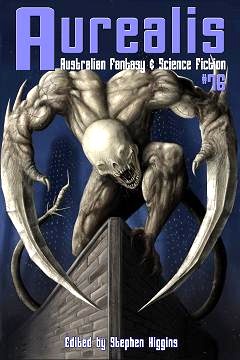 “No Home for Us” by Meryl Stenhouse is about a woman, Makeda, and her female crew, surviving in a violent gangland world of modern day pirates, smugglers and warlords. She’s tough and can fight but she’s not superhuman and she makes mistakes, especially when she is supposed to deliver a mysterious man with magical markings carved into his forehead to a warlord. The story avoids the usual blunt force solution and is a refreshing alternative to the too common fantasy solutions of a sword, a magical spell, a cunning plot or all three. It’s well written, exciting and satisfying. It is one of the best short stories I have reviewed.

“The Long Shadow” by Melanie Rees shows what it is like to live in rural Australia during a long and devastating drought. The main character is Jam, short for Jamieson, and she sees shadows that reveal the true nature of people. They show the feelings of Jam and her mother in her daily struggle to keep the farm going while her husband is unconscious in hospital. It’s a grim story, told and with an immediacy that’s hard to ignore.