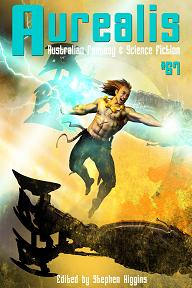 “Transit of Hadley” by Tsana Dolichva
“Flood Samaritan Law” by Jennie A. Rix

“Transit of Hadley” by Tsana Dolichva

Colonists on Posidonius, with its rain and endless ocean that forces the population to live on pontoons, learn that Earth has become uninhabitable. Xia, a micro and microxeno biologist, is emotionally devastated. She gets depressed and contemplates suicide until her brother and his girlfriend—a relationship she was too obtuse to notice—give her surprising, and uplifting, news. This story moves slowly, and Xia’s response to the situation comes across as stilted.

In this post-apocalyptic tale, Susan, now fifteen, was, as a newborn, rescued from the Flood by Pete who is partnered with Nate. This is a time when the water is radioactive, and prolonged exposure to it can cause radiation sickness or death. Pete has been diving for years to provide for the family. Because of the titular law, Susan is forced to give her recently located biological father, Darryl, a chance at parenting her. This intricately woven story addresses a number of issues—among them, being a teenager, same-sex relationships, and what really makes a family.