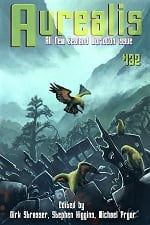 The latest issue of this Australian publication offers a trio of short stories, one fantasy, one science fiction, and one blending elements of both genres. The quality of all three works creates a particularly enjoyable experience for the reader.

“Arachne’s Web” by James Rowland retells familiar myths from ancient Greece in imaginative ways. The woman who famously bragged that her weaving was finer than that of Athena faces the goddess in a contest of skill. Arachne creates a tapestry depicting ways in which mortals outwitted the gods. In this way, the story offers new versions of old tales, leading to different outcomes than expected.

Retelling legends of the past in a fresh manner is a daunting task, and the author undertakes it with great ability. Narrated in a clear, elegant, and poetic style, the individual accounts of encounters between people and deities provide thoughtful insights into human life.

“Like Clocks Work” by Andi C. Buchanan consists of alternating narratives that do not seem, at first, to be related.

In one part of the story, a mechanical figure of a woman, fully alive and sentient, watches over a city from a clock tower. Over time, the city suffers the effects of war. Eventually it is only an empty shell, abandoned by its human inhabitants.

Other sections depict a starship on its way to a distant planet. A robot, designed to transform slowly from machine into flesh and blood, wakes one of the human passengers from hibernation from time to time, in order to watch over the vessel during its journey.

The author blends fantasy and science fiction to create a fully integrated whole. The story explores the boundary between human and machine, allowing readers to empathize with artifices as they would with people. The notion of a robot evolving into a biological organism is particularly imaginative and thought provoking.

In “DogWorld” by Peter Friend, a young woman whose beloved pet recently died gets a job at a hospice for terminally ill canines. The institute uses electronics to place the animals into pleasant dream states. The protagonist discovers the darker side of this technique, and takes matters into her own hands.

The speculative technology is plausible, as are the possible dangers associated with it. Anyone who has ever lived with an animal companion will appreciate the story’s emotional appeal. The way in which the antagonist receives poetic justice from the main character is fully satisfying.