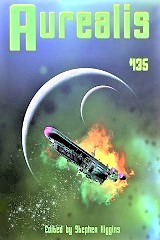 “The Sin Eater” by Michael Kellichner

Three stories featuring characters who find themselves in unpleasant situations appear in the latest issue of this Australian publication.

The narrator of “Smile” by Keith Oakden-Rayner is a criminal who steals the images of people’s faces, in order to sell them to others. His customers wear these false images in order to disguise themselves while committing crimes, or to enter restricted areas. After serving a prison term, he becomes a worker on a space station, then teams up with a partner to work the same scam.

Many futuristic details come together to create a believable science fiction setting. The premise is an interesting one, but the narrator gets his comeuppance in so predictable a fashion that he comes across as a fool.

The main character in “Mary, Mary” by Fiona Bell is a genetically altered clone, one of many designed to be perfectly obedient servants. Unlike others of her kind, she experiences emotions she is not supposed to feel. This leads to an ambiguous relationship with her owner, and conflict with a fellow clone.

The theme of an artificially created being, whether robot or clone, becoming more human than expected is a familiar one. The author creates a sympathetic character through the use of second person narration, but the plot lacks originality.

The narrator of “The Sin Eater” by Michael Kellichner consumes bread with grains of salt symbolizing the sins of the dead or dying. In this way, she takes on their sins, ensuring their entry into paradise. When the sin eater who adopted her when she was a young orphan dies, she must consume enough salt to account for all the sins her predecessor accumulated during her lifetime.

Anyone who remembers the old television show Night Gallery will be reminded of the episode “The Sins of the Fathers,” adapted from the story of the same name by Christianna Brand. Although this is undoubtedly only a coincidence, the similarity will lessen the impact of the newer story for those readers familiar with Rod Serling’s anthology series. The most distinctive aspect of the current work is the striking, visceral image of eating a very large amount of salt.

Victoria Silverwolf has the complete series of Night Gallery on DVD.