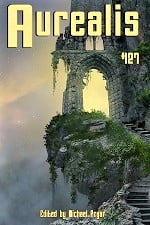 Readers have a choice among dark fantasy, apocalyptic science fiction, and fantasy adventure this month.

“Sly Ghosts” by Geraldine Briony Hunt takes place in a fishing village. The protagonist is a woman with a history of mental illness. She sees an island approach the mainland, and feels the phantoms of drowned fishermen calling her to join them.

This brief synopsis makes the plot sound simplistic, but, in fact, it is complex and subtle. Unlike most fiction featuring supernatural events and mental illness, it treats the disease in a realistic fashion. The main character is not insane, but her disorder is neither imaginary nor trivial. Adding to the story’s appeal is the author’s vivid and evocative style, bringing the setting to life.

The narrator of “Hatecars” by William Broom is an artificial intelligence in the form of an automobile. Its job is to track down and destroy other sentient vehicles, which carry a virus that causes them to attack people. The diseased cars have recently started kidnapping children, for unknown reasons. With the help of a woman who lost her daughter to the malevolent automobiles, the narrator enters an abandoned city and faces a greater challenge than expected.

The author does a good job of writing from the point of view of a machine that doesn’t fully understand human beings. The explanation for the kidnappings is anticlimactic. Much of the story resembles a car chase movie. (Appropriately, the magazine comes from the same nation that brought us Mad Max.) Readers looking for plenty of violent action will best appreciate this fast-moving tale.

“Healer’s Trial” by Emily Randall features a humanoid being with wings, who has healing magic and the ability to sense the emotions of others. She journeys to a human city, seeking employment as a healer. When a street urchin steals a valuable object from her, she winds up using her powers to help his friend, who is near death.

The characters are likable, and reading the story is a pleasant experience. Brief references to steam technology and automata seem out of place, given that the background is that of a typical fantasy world. The fact that the protagonist has wings is completely irrelevant to the plot. An afterword from the author makes it clear that the setting is based on a roleplaying game, which may explain some of its limitations.

Victoria Silverwolf would like to point out that this issue also contains the first part of a serialized novel.