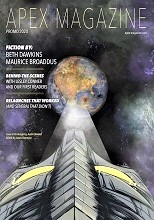 “The Legacy of Alexandria” by Maurice Broaddus

This special mini-issue marks the return of the magazine after more than a year, due to the publisher’s lengthy recovery from major surgery. It serves as a preview of next year, when full issues will once again be available.

“The Legacy of Alexandria” by Maurice Broaddus takes place in a future United States devastated by climate change. The protagonist and his elderly dog evade bands of militia to reach a place where books, mostly dealing with the African-American experience, are stored. Enemies of the informal library attack, but the protagonist has an invention that turns the tide of battle.

The author deals with serious issues of class and race, while providing vivid scenes of violent action. Some elements of the story, such as the fact that the protagonist imagines his dog talking to him, seem out of place in an otherwise realistic dystopia. The antagonists are too openly villainous to be fully believable.

In “Small Hopes and Dreams” by Beth Dawkins, working class teenagers live in a world where people suddenly disappear, taken beyond a strange wall by humanoid aliens. The narrator catches sight of the beings, leading to a final confrontation with them for her and her friends.

The author expertly portrays the lives of young people living in poverty. The speculative aspects of the story are not as powerful. The motives of the aliens are never explained, and what lies behind the wall remains a complete mystery. If the premise is intended as an allegory for the class system, its exact meaning is unclear.