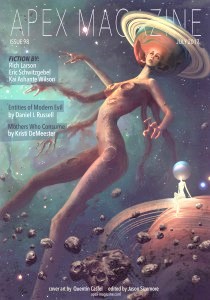 “The Turing Machines of Babel” by Eric Schwitzgebel

“L’appel du vide” is a bleak story by Rich Larson in an equally gloomy and bleak setting. When Pau is abducted and held prisoner, drugged by an unknown captor, he assumes it is because of the project he is involved with at Ceylan Industries. But as time goes on he is never questioned about his top secret work and he begins to grow suspicious at the familiarity he feels toward his captor. Despite having a brilliant narrative twist, I felt it wasn’t explored thoroughly enough before the story moved on to a secondary and less impressive twist. In all, though, the story was well written and very enjoyable.

“The Turing Machines of Babel” by Professor of philosophy Eric Schwitzgebel, is a surreal tale of a man living in a universe that is an infinite library populated by rabbits that travel between horizons and levels, altering and editing the books upon the shelves. Upon choosing to follow a rabbit one day, the main character Hemete explores the library, studying the rabbits and discovering they can be taught, programmed by the books, to perform specific editing tasks, creating a network of living machinery that eventually unlocks the secrets of reality to discover…

“The Turing Machines of Babel” is a weirdly fascinating story that somehow makes sense within its own universal constants. Experimental science-fantasy at its best.