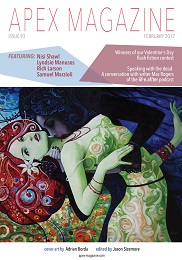 “Queen of Dirt” by Nisi Shawl

“The Bells” by Lyndsie Manusos
“As Long As You Can Stand It” by Joanna Truman
“Butterfly Man” by Tonya Walter
“St. Theophilus the Penitent” by Rich Larson
“You Too Shall Be Psyche” by Rich Larson
“Servant of the Aswang” by Samuel Marzioli

The February issue of Apex Magazine has four stories, as well as the three winners of their Valentine’s flash fiction contest.

Nisi Shawl‘s “Queen of Dirt” tells about Brit, a counselor at a summer camp. There have been troubles, with a relatively high number of suicides over the years. Brit is a “Visioner,” with the ability to deal with creatures that no one else can see. But she is caught by one of those creatures, and has to find a way to survive. I liked the characterization of Brit and the campers, and her plight is an interesting one. I did find her ability a bit vague, though.

“The Bells” is about Mary, a woman who has been turned into a wooden puppet and, because she cannot feel, is used as a mechanical prostitute by her owner and pimp. When attending to a particularly gross customer, she snaps. Lyndsie Manusos‘s character is defined entirely by how miserable she is, and the story aims for tragedy, but seems more just an excuse for gratuitous cruelty.

“As Long As You Can Stand It” by Joanna Truman is one of the three flash fiction stories this month, a story about a girl and her nightmare personified. I’ve made it sound better than it is; the nightmare is too undefined and the story is just a way to reach a punchline.

Tonya Walter‘s “Butterfly Man” has a woman finding a man with butterfly wings. It seems to be saying something about giving up yourself for love, but I found it a lot of poetic language but no story.

“St. Theophilus the Penitent” by Rich Larson quickly describes a form of perverse love, where, every year, a man creates an artificial replica of his dead wife. Like the rest in the contest, it’s certainly a meditation on love, and expands on the concept in a surprising way.

Getting back to the full-length stories, it’s Rich Larsen again with “You Too Shall be Psyche,” a story that has some similar elements to his other one. Reva is a girl in a primitive society, who is bothered that she was not chosen to be sacrificed to The God in the Pit, an act that keeps their village functioning. Angry at being turned down (and jealous that her sister was chosen instead), Reva goes down into the pit to confront the god. The story works on many levels; we know what’s going on, even if Reva doesn’t understand. It leads to a twist ending that manages to horrify.

Samuel Marzioli‘s “Servant of the Aswang” is the story of a young Filipino woman who has been forced to become the servant of an aswang, a type of native monster that kidnaps girls and tortures and kills them. She has reluctantly become the aswang’s accomplice, luring girls to their death in order to avoid the suffering she would undergo if the dared to escape. But when the aswang captures a 6-year-old, it forces her to make a decision. This is a very dark story that does a fine job of drawing its characters.

Overall, these stories all border on some sort of horror, but manage to avoid the clichés of the genre.

Chuck Rothman is the author of Staroamer’s Fate and Syron’s Fate and over 50 short stories.