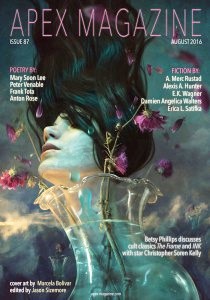 “The Gentlemon of Chaos” by A Merc Rustad

“Fall to Her” by Alexis A. Hunter
“I Remember Your Face” by E.K. Wagner

“The Gentleman of Chaos” by A Merc Rustad tells the story of “She,” sister to the king who has been forced into becoming his bodyguard. More than anything else, the king fears the Gentleman of Chaos, a mythical assassin known for killing royalty and nobles. As the king becomes ever more despotic his appointed time with the Gentleman approaches. The story has a number of interesting aspects; the writer delves into identity, betrayal and justice. Although not ground breaking, the story is interesting and overall well written.

“Fall to Her” by Alexis A. Hunter is an update on the story of the siren told in a quasi-poetic tone from the viewpoints of both the human and the alien. The actual plot is sparse, workers on a space station hear the siren call when working outside and wish to tear their suits off to join with it. The protagonist is addicted to the song and is eventually put under supervision. The strengths of the story are the hints at the nature and character of the sirens as well as the description of addictive need. However, the writing at times seems overly trite and predictable. While enjoyable, I felt like I have read this same story many times.

Set in a post-apocalyptic world, “I Remember Your Face” jumps between the childhood of a girl in a dissident compound and the same woman as an adult bounty hunter. E. K. Wagner combines questions of memory and revenge against an unrelentingly grey background. There is a lot to like about the story and the conclusion both tugged at the heartstrings and felt logically inevitable. From her bio, Wagner is a fairly new writer and sometimes the rough edges show in scenes that are trite or cliché. Overall, I enjoyed the story and think that the author has good potential for better work in the future. [As an afternote, I was happy to see that she has published in a journal run by my university.]

Set in the early days of World War II, the last magician in Lithuania tries to care for his sick daughter while hiding his magic from the Russians. As she loses strength, he presses his luck by showing her illusions to keep her entertained. When the Russians finally come for him as they had his wife, he performs one final illusion. The tone of the piece is nigh on perfect for the setting and the writer captures the sense of dread and fear admirably. At the same time, she manages to include the human need for beauty in a completely organic fashion. This is certainly worth the read.