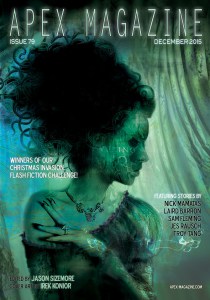 “She Gave Her Heart, He Took Her Marrow” by Sam Fleming

“Aishiteru Means I Love You” by Troy Tang
“The Phylactery” by Nick Mamatas
“A Letter to Santa” by Melanie Rees
“Memory Tree” by Jess Rausch
“Christmas is Coming” by Gina L. Grandi
“Reconstituted” by Marlee Jane Ward

Apex Magazine finishes the year with not only the usual weekly story, but also three winners of their Christmas Invasion Flash Fiction Contest.

“She Gave Her Heart, He Took Her Marrow” by Sam Fleming tells the story of Chancery, the last living person on an island that suffered from the Walking, a disease where people start walking into the sea until they drowned. Her companion is Hedron, a strange creature that keeps her company. But when humans arrive, asking her to come to the mainland to be used to create a defense from the disease, Chancery isn’t sure she wants to. Chancery is a good character, but I find the ending really led me to think, “Well, what did you expect?”

Troy Tang is next with “Aishiteru Means I Love You,” told from the setting of a blog and its comments and is about Dave and his crush on a Japanese AI/singer. He hacks into the net and has her show up, as his adolescent fantasy that he isn’t sure what to do with. The result is dark and a bit ugly. There is some musing on the part of the nature of morality, but it’s a very pessimistic view of humanity that I didn’t take to.

“The Phylactery” is the story of Tony, who puts a good luck charm under the mattress of his child, even though he doesn’t believe in magic or God. It’s part of a tradition. There’s not much of a fantasy element in Nick Mamatas‘s story, and I found the entire thing murky and the characters a mystery. It seems to be saying something about the ubiquity of folk legends, but never gels.

The first winner of the Flash Fiction Contest is “A Letter to Santa” by Melanie Rees. It’s hard to put a good story and characterization in 250 words, but the story succeeds as a letter to Santa from Sammy, a boy who is suffering from some serious problems. This is deftly constructed and wrings a lot of emotion out of the situation.

“Memory Tree” by Jes Rausch tells about a new type of gravestone—a memory tree—that takes on the personality of the dead person and keeps it alive. It’s a series of vignettes showing the possibilities and heartaches of the technology. The ramifications are well thought out, but I think the story would have been better served if it had a narrative thread.

Another contest winner, “Christmas is Coming” by Gina L. Grandi may be the creepiest story I’ve ever come across about Santa Claus. It’s dark and disturbing, and I hated what she did with the concept, but since the goal is to make you feel very uncomfortable, the story succeeds on all counts. I don’t like it, but I’m not supposed to, and I’m impressed by Grandi’s fearlessness about going into dark corners and telling it all with subtlety and skill.

“Reconstituted” by Marlee Jane Ward is another flash fiction entry, about a boy who had to teleport across the galaxy on Christmas day to spend it with both parents. It’s good, but ultimately a slight tale (especially compared to the other contest winners).

I was far more impressed by the contest winners than the regular stories in this issue, which stuck too much with doom and gloom.