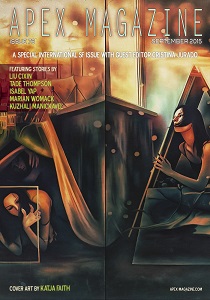 Some people in the world of Tade Thompson’s “Child, Funeral, Thief, Death” are natural finders. They just know where things are without having to look or even to understand what they’re looking for. It’s not the only kind of knowing, and Fadeke isn’t the only man in Nigeria who has the ability, but after he finds a group of people like himself who take him to the funeral of another of their kin, Fadeke realizes what his power could be used for, and he’s not entirely moral about it. Before he knows it, Fadeke is a kleptomaniac, and unfortunately just because he can find valuable things effortlessly doesn’t mean that he can just as easily escape from getting caught.

In general I enjoyed “Child, Funeral, Thief, Death.” The Nigerian setting and the first person, present tense narration was refreshing and kept my attention fixed on the story from beginning to end. The anti-hero protagonist’s blasé description of events, far from making him an uninteresting character, adds to the normalization of the story’s speculative elements. The addition of the funeral scene however, was difficult to connect with the rest of the story. It does little to explain why Fadeke becomes a thief, and the characters introduced in the scene don’t ever appear again. It seems somewhat out of place in hindsight. Likewise the story ends very abruptly, possibly due to the immediacy of the narrative style, or because previous events seem to be leading to a bigger climax than was offered. Whatever it was, it felt like stepping off the edge of a cliff, when one was sure there was more road to be walked on.

Christmas is hard on Chas. With her father eleven years dead and a house full of too noisy, too concerned, too normal relatives visiting, Chas just wants a quiet moment to do her homework and not think about the future. But in Isabel Yap’s story “Find Me,” Chas’s carefully maintained composure starts to unravel when Roger shows up, out of the blue, for the first time in years. One more body in an already packed house wouldn’t normally matter except that no one else can see Roger. No one else has ever been able to see Roger. Chas doesn’t even know who or what Roger is. His reappearance can only mean one thing, though: maybe Chas isn’t as fine these days as she wants everyone to think.

“Find Me” is a very well put together story packed with emotion and trauma and suspense—none of which are fully resolved at the end, which adds to the realistic feel of the story. The mystery of Roger is left completely to the audience’s speculation. Is he a figment of Chas’ imagination, conjured up to help her deal with her anger and depression after her father’s death? Is he a wandering ghost who has latched himself onto Chas in her time of need? Or is he another entity entirely, a denizen of another dimension who has, for some reason, formed a bond with a young girl across time and space? As much as Chas considers these possibilities, she doesn’t really want to find out, and to some extent, neither does the reader. Unlocking the mystery removes the magic, and even though Chas doesn’t wish to return to those dark days of spontaneous violence and doctor visits and concerned looks, neither does she want to let go of this one thread of comfort that she has to fall back on. It’s a very real conundrum, and despite the protagonist of the story being a child, is one that readers will have no trouble relating to.

Out in the middle of a frozen wasteland, on a desolate planet far from his home world, Lawrence wanders through a blizzard with what remains of his interplanetary expedition team. They’re searching for their lost comrade Felix, who has disappeared without a trace out on the endless white tundra. What happened to him—or what took him—is anyone’s guess. In Marian Womack’s “Frozen Planet,” it could have been the hallucinations that did him in, or it could have been the mysterious, unseen creature that howls from somewhere out in the unforgiving white wilderness.

As Lawrence and his team wander a planet as white as a blank canvas, so too does the plot. Stylistically, the story is very minimalist. Word count is spent on repetitive descriptions and emotional evocations with little to none given to the reason for their being on the planet, how they came to be there, what the rules of their new reality are, or what (if any) danger the unseen beast poses. The prose is cumbersome at times, and distracts the reader from the story. Tense also shifts frequently between scenes, and the inclusion of a direct address to the audience in the middle is difficult to juggle with the dominating distant third person point of view. The reader is given few mechanics with which to judge the contextual probability of Lawrence’s escape (or death, it’s unclear) in the final scene. At the end the reader is left more or less where they started at the beginning, with no greater insight into the world, the characters, or the plot.

Feng Fan’s whole life has revolved around a passion for mountaineering in Liu Cixin’s “Mountain.” Even putting himself in the middle of the ocean with no mountains around for miles is an act of penance from an accident on his last, infamous climb. But when an alien spacecraft the size of the moon arrives above Fan’s head one night, creating a towering mountain of water with its immense gravitational pull, Fan sees his purpose in life at the summit of the cone of water. Overcoming the traditional laws of Earth’s gravity and swimming to the top, Fan discovers an alien race eager to chat about history, physics and the philosophy of life.

This long novelette drags its feet in exposition in the opening, making the prospect of reading it to its full 15,000 word conclusion daunting. Readers who stick to it will be rewarded, however, as underneath what seems like a rock solid layer of uninteresting prose is a story with great imagination and heart. The allegorical narrative unfolds slowly through the history of the exploration of an alien race inverse to our own. Mechanical and metallic in nature, these interstellar visitors broke through an atmosphere of rock and liquid water to leave their homeland. Fearless in the face of multiple setbacks, wars, and fatalities, they make a pit stop on Earth to remind one man that boundaries are only what we make of them, and wherever we are in time or space, we are always at the foot of a mountain.