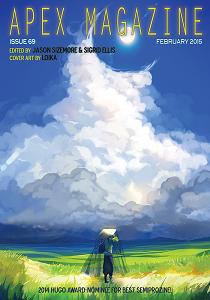 “Requiem, for Solo Cello” by Damien Angelica Walters
“Heirloom Pieces” by Lisa L. Hannett
“Foreknowledge” by Mary E. Lowd
“Inhale” by Rhoads Brazos
“The Best Little Cleaning Robot in All of Faerie” by Susan Jane Bigelow
“A Revolution of One” by Brian Keene

Damien Angelica Walters starts out the February Apex Magazine with “Requiem, for Solo Cello,” a thousand-word story where the protagonist imagines she’s a cello being played by a master cellist. There’s really not much more to it than that. It reads like the main character was a teenager with a crush on a rock star. The writing is colorful, but the story ultimately just presents the situation without much depth (except, I suppose, with a few sexual metaphors), and not a lot to engage you.

“Heirloom Pieces” by Lisa L. Hannett is about Cat, a mother who is going through what seems at first to be a funeral for her daughter Annie. She goes through the sorrow of the event and the memories of her daughter and what she wanted for it, as though she knew she was going to die. It turns out, of course, that we’re really talking about something else. Unfortunately, the twist makes the story murky as the author tries to hide it from the reader and it retroactively makes the behavior of the characters in the story merely red herrings. I find it hard to believe they would act the way they’re portrayed in the situation that’s finally revealed.

Mary E. Lowd takes a very old SF idea and comes up with a new way to look at it in “Foreknowledge.” It’s using the conceit that you can predict the cause of death of your child even before she is born. The narrator is a woman who is told the unborn baby will die of SIDS, and goes into it knowing that her daughter won’t have much time to live. The story spends far too much time focusing on the narrator’s angst and agony, but when it finally gets to the end, the resolution is wonderfully done. I wish the story were shorter, but the ending is strong enough to put it solidly in the “recommended” column.

“Inhale” by Rhoads Brazos is less than a thousand words, and probably could be cut in half. It’s a description of time running backwards – not particularly new – that ultimately turns into a shaggy God story.

“The Best Little Cleaning Robot in All of Faerie” by Susan Jane Bigelow is quite different from any other story in this issue, mainly because it shows a delightful sense of humor and is fun to read. Fleet Cleaning Robot SFN–7894–Z (nicknamed Ms. Clean) is aboard the spaceship Zinnia when the crew is magically rendered asleep and the ship is invaded by goblins. They’re out to find Hob, the only member still conscious, who has been banished from his land by the Nightmare Duke. They wake Sgt. Ndala to help them to go into his world, and who does the one logical thing when fighting magical creatures: she brings a tank. The mix of fantasy and science fiction never seems strained and the story is a joy.

It’s been awhile since I reviewed Apex and this is a far weaker issue than the previous ones. Two of the five are all about twists, and the others sacrifice basic storytelling for a litany of images. It would have been better if they had managed to do both.