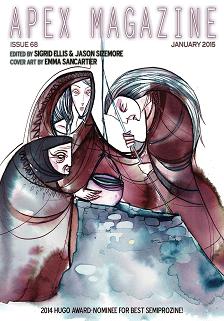 “Pocosin” by Ursula Vernon is a folktale reminiscent of some of Mark Twain’s better short stories. It tells the story of a witch named Maggie Grace (always “Maggie,” not even the Lord God can get away with calling her Margaret) and of a last kindness to a small old god who is dying. Maggie stands off both Heaven and Hell in order to give the god his last wish: to die in peace and go wherever it is that gods go when they die. Ms. Vernon excels in her description of the Southern swamps and her writing lends the story an evocative and atmospheric touch—you can almost hear the swamp critters and feel the humidity. Well worth your time.

“Multo” by Samuel Marzioli is a Filipino ghost story told from the perspective of a man who starts to wonder if the bogeyman that he feared so much in his childhood is in fact real and if so, could it have found him again? “Multo” starts with a good premise, but it meanders some and takes enough time to get to the point that it seems longer than it actually is. The scenes where the narrator relates his childhood seem to flow better than the “present day” scenes. The childhood scenes also do a good job of capturing that feeling from childhood where all the ghost stories and urban legends you heard could, just maybe, be true.

“Anarchic Hand” by Andy Dudak is a cyberpunk story set in 2174. Mankind has found a way to map consciousness into computers. Called “instances,” these disembodied intelligences have found that being such isn’t all it’s cracked up to be. They want to return to flesh and the accompanying bodily sensations and have formed a plan to infect humanity. Humanity responds by creating “antibodies” to prevent this and the “instances” are confined to hiring people to infect in a “pay-to-play” scheme. The story is told from the point of view of a woman who had herself cryogenically frozen and then had her consciousness uploaded without her knowledge. She has to decide whether or not to help other “instances” take over a body or to move on to an orbiting database that constitutes a sort of “machine heaven.” Engaging and well-written, it’s the second best story in this issue.

“John Dillinger and the Blind Magician” by Allison M. Dickson, on the other hand, is the weakest story in this issue. Set in an alternate Prohibition-era Chicago where magic exists, it details the last hours of John Dillinger and attempts to relate what really happened at the Biograph Theater on that rainy evening. The story aims for a hardboiled, noir sort of genre feel but just ends up feeling clichéd. The dialogue is also clichéd as well as somewhat stilted, and the last minute twist involving sorcerous disguises is somewhat obvious. All in all, it reads more like middling grade fan-fiction than a published work should.