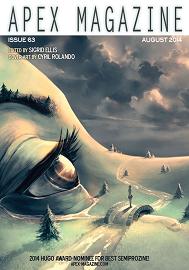 “Ten Days’ Grace” by Foz Meadows is set in a society much like that in Margaret Atwood’s The Handmaid’s Tale – one where the government is the enforcer of strict religious behavior in all walks of life. The protagonist, Julia Kettan, receives a visit from an agent of the Bureau of Family Affairs informing her that her husband is dead. Since she has a child, and being a single parent is against the law, she must choose a new husband. But the law allows 10 days’ grace in which to do so, hence the story title. The rest of the story is Kettan’s reaction to the situation, and her final decision on whom to marry.

Meadows does a good job setting up the society and its restrictions, as well as giving us insight into Julia’s past, which greatly influences those who would be willing to marry her. However, the scenes of her regrets and sorrow, and when she tells her daughter of her father’s death didn’t quite have the emotional pull they might have. The ending, also, seemed to lack the emotion required, given the situation. Nevertheless, the story was a compelling read, and certainly felt plausible.

“Sister of Mercy” by Amanda Forrest is the best of the bunch, this month. Forrest’s lush, nearly poetic prose immersed me in the world of the story, evoking an almost idyllic feeling, which served nicely to counterpoint the horrors suffered by two sisters, who are the only characters in the story. Set in an unspecified near future, a plague has ravaged civilization. Forrest unfolds the tale gradually, not revealing what has happened, but simply beginning with one sister attempting to care for, and cure, the other. The events that brought them to their current location and situation are told as flashbacks.

For a post-apocalyptic story, this is one of the most personal I’ve encountered. The love and dedication of the caregiver is moving, and as we discover more about what happened, her motives are even more understandable. The ending left me almost breathless, with a haunting scene worthy of Poe.

“The Sandbirds of Mirelle” by John Moran is set in 2309, and is the story of an 18-year-old assassin’s first kill. He boards a space ship with three other passengers, to the planet Mirelle, to view the hatching of the sandbirds native to that planet. The birds, and their hatching, are viewed as holy by some people, while to others they are just a beautiful part of nature. We are introduced to each of the passengers, and their reasons for the trip, during the journey in space and on the planet. We are told up front that the narrator will kill one of them, but who it is, and why, are not revealed until the assassination finally happens.

Told in the first person (of the assassin), it is a very straightforward narrative, with little emotion. Even the descriptions of the beauty of the sandbirds as they hatched and took flight seemed to lack much spirit or awe. I can only assume this is meant to give us a sense of the lack of feeling the assassin is experiencing. However, for me, it just made the story rather flat.

“Jupiter and Gentian” by Erik Amundsen is a trippy little story about a method of space travel that seems to involve an out-of-body experience by the pilot of the spaceship. While orbiting Jupiter, the pilot (Gentian) is ‘swimming’ in the atmosphere, and having a rather Zen-like dialog with a knight in armor. It is difficult for Gentian to remain coherent, and she struggles to answer the questions. There is a brief flashback to when she was recruited as a pilot, but there are no real clues as to how this ordeal will enable Gentian to pilot the ship. The entire story reads like an LSD trip, almost. And it is this experience that seems to be Amundsen’s aim, as nothing else really happens. Perhaps this story might be better enjoyed were the reader also under the influence of a mind-altering substance?