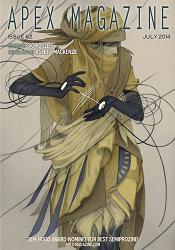 “The Food in the Basement” by Laura Davy
“Blessed are the Hungry” by Victor Fernando R. Ocampo
“Insurrection in Silk” by Gillian Conahan

The three free original stories from this month’s Apex Magazine all feature strong, active female characters. The magazine also contains a reprint novella and four poems, in addition to their exclusive eBook/subscriber content.

In “The Food in the Basement” by Laura Davy, Sondra was kidnapped by a vampire 169 days ago, and he keeps her locked in a comfortable basement. Sondra is active and compelling, and her drive to escape completely believable, but the story itself felt flat and plot-driven. I would have liked a stronger moment when Sondra found her will to escape.

The main character in “Blessed are the Hungry” by Victor Fernando R. Ocampo is also active and interesting. Elsa and her family live in a generation ship, harvesting mushrooms that they send up to the higher decks. The people on their deck are forced to have large families to maintain the population’s breeding viability, but they never have enough food to feed all of the hungry mouths. Elsa’s father and brothers participate in an uprising, and Elsa, encouraged by a mysterious voice in her head, decides that she has to help them. The story takes a while to get moving, and I’d like more descriptions to ground the world. The ending feels too sudden and easy, and a bit too deus ex machina.

Gillian Conahan‘s “Insurrection in Silk” is easily my favorite story in the issue. The main character is the conquering Empress’s captive dressmaker, and has served in her court for three years, creating gown upon glorious gown. Many of them are soiled with blood after a single wear, since the Empress carries an axe that she does not hesitate to use on anyone who displeases her. The dressmaker’s family is held captive to ensure her loyalty, but she has a secret store of poisoned pins that she plans to use to free herself and her loved ones when the time is right. The story brims with lush descriptions, and the ending manages to be both open and satisfying.