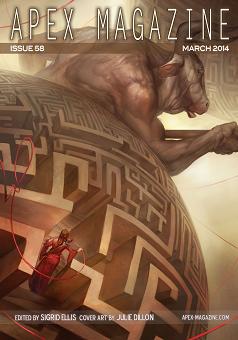 This month’s issue also includes two exclusive stories to which I have no access. The stories that are available are all beautifully-written and haunting, but they hold the reader at arm’s length, and for the most part, I had a hard time caring.

The protagonist in “Waking” by Cat Hellisen works in her family’s angel-dedicated museum. The part-flesh, part-clockwork angels are a mystery—they appeared then withered and died without any explanation. But when she and her younger sister find a rusting angel in the woods, they try to learn to listen and understand, and eventually give the angel a voice. At the end of the story, the other characters tell the protagonist that she was the key to the transformation, but I’m not exactly sure how that’s true.

“Undone” by Mari Ness is a retelling of the fairy tale The Six Swans, told from the point of view of the swan-armed brother. He resents his unfinished state, and turns against his sister. The prose is lovely, but I didn’t find the story engaging.

The maiden and the dragon in “To Increase His Wondrous Greatnesse More” by Sunny Moraine conspire together to change their story. The story offers three potential endings, and in the final one, they fly away to be monsters together. I liked the theme, but the story just didn’t draw me in.

“The End of the World in Five Dates” by Claire Humphrey is my favorite of the stories in this issue. Each date is a foretold apocalypse, leading up to the date that the main character, Cass, has seen as the end of the world. Her vision does come to pass exactly as she saw it, but it’s not what she expected, and she has to deal with life going on.