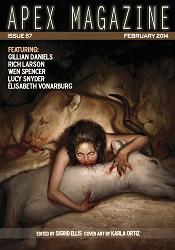 “Antumbra” by Lucy A. Snyder
“Maria and the Pilgrim” by Rich Larson

“Antumbra” by Lucy A. Snyder is a good post-apocalyptic story. By that, I mean that the cause for the apocalypse is plausible, and the lives of the survivors make sense in the resultant world. In this case, the cause is a near-miss of a large space rock, which results in the moon being in a static orbit, so that some people are always in light, some are always in darkness and some in the shadows. And this wasn’t the only negative result: apparently the space rock was highly radioactive, causing massive genetic mutations. This was the only part of the story that veered a bit too far from “real” science, but if you roll with it, you’ll be rewarded. Snyder has a good narrative style, drawing in the reader from the get-go, and the story has a great ending. A warning: this story has some graphic sexual scenes.

Another post-apocalyptic tale, “Maria and the Pilgrim” by Rich Larson makes the reader work a bit harder to discover just what happened, and what is going on. This task is made a bit harder with the Spanish terms thrown in. (The story apparently takes place in rural South America, though no exact location is given.) Like the previous story, this one is definitely worth reading, and also has a great ending. And, again, the cause of the apocalypse is feasible (though to reveal its exact nature would spoil the story – part of what makes it work is that what is going on is only gradually revealed), and the resultant world and the people are plausible. Because of the setting and how it’s told, this story has a nearly other-worldly quality, which serves it quite well.