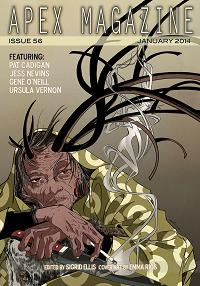 Gene O’Neill‘s “Pale Skin, Gray Eyes” is told from the perspective of a young boy in an isolated village. A stranger is captured, and is sentenced to death merely for being an outsider. Said stranger does not turn out to be what the village suspects, and violent revenge follows. Their society, stagnant and rigid for so long, falls apart when faced with the unexpected, and their inability to defend themselves is tragic. The text itself, however, has some punctuation errors that detract from the narrative’s effect.

“Jackalope Wives,” by Ursula Vernon, is the story of a young man determined to catch one of the eponymous creatures. He possesses a minor amount of magic, which isolates him from the rest of his people, and believes he would be happier with a jackalope wife than a human.

The real protagonist is the boy’s grandmother. When his pursuit of a wife goes disastrously wrong, it’s she who has to pick up the pieces. Short though the story is, it portrays her as an interesting, complex character, and the source of her determination is bittersweet. The text itself is beautifully written, flowing and descriptive without ever descending into purple.