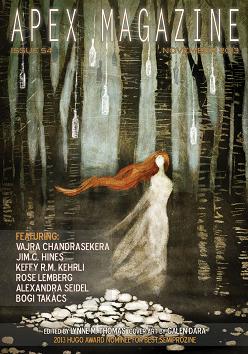 “Recordings of a More Personal Nature” by Bogi Takács
“The Jackal’s Wedding” by Vajra Chandrasekera
“This is a Ghost Story” by Keffy R.M. Kehrli
“The Creature in Your Neighborhood” by Jim C. Hines

“Recordings of a More Personal Nature” by Bogi Takács

Idriwu the archivist finds that she is no longer able to make a psychic connection to the archives. A temple maiden, Athlaniyo, is called upon to help. The council realizes that their culture’s connection to the mystical archives is fading. Using magic incantations and herbal potions, Idriwu and Athlaniyo devise a temporary method of forcing the psychic connection. This lets them manually record what is in the archives. That there is even a question about whether the archivists should also be allowed to record those parts of themselves that have also been kept in the archives makes it easy to relate to the events here.

“The Jackal’s Wedding” by Vajra Chandrasekera

Jackery, a shape-changing jackal, meets Tien. Jackery’s father lives only to watch over a king’s treasure that is coveted by humans. After Tien courts Jackery and she consents to marry him, Tien kills Jackery’s father and steals the treasure. Jackery, having learned a few human things from Tien, must decide how to react to her husband’s actions. This is a tight animal-wife story with a few twists.

“This is a Ghost Story” by Keffy R.M. Kehrli

Despite the title, this is fiction, yes; speculative, no. This is an experimental story that borders on existential. It includes prose, poetry and even some parts that are written vertically instead of horizontally across the page. The gist of the story is that a man lives, has relationships and regrets, then dies. This is a story for those looking for something other than straightforward speculative fiction.

“The Creature in Your Neighborhood” by Jim C. Hines

Formatted like a script for an episode of a popular television series, this story brings to mind a mash-up between Jim Henson’s Muppets and Mr. Rogers’ Neighborhood. With “share” the word of the day, and brought to you by the letters, P, T, S, and D, a television community of puppets comes together when a werewolf kills some of their friends. The few obscenities are funnier when envisioning a puppet saying them.