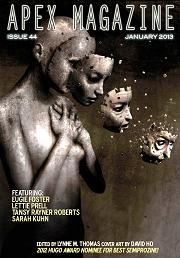 “Trixie and the Pandas of Dread” by Eugie Foster
“The Performance Artist” by Lettie Prell
“The Patrician” by Tansy Rayner Roberts (reprint, not reviewed)

“The Performance Artist” by Lettie Prell is my favourite from this month’s Apex. The story follows the life and works of Anna Pashkin Bearfoot, an artist famed for her radical explorations of mind and flesh. In one such work, she transfers her consciousness to a computer, much to the delight of her followers. But before their attention spans can expire, she ups the stakes, allowing her audience to manipulate her digital existence, creating multiple versions of Anna.

The plot shares affinities with The Truman Show, though in this case, the main character knows she’s on display. The narrator guides from overhead, unfolding a raw and unsettling world. Throughout, the reader is given access to various opinions of critics and bystanders – some of the cleverest dialogue I’ve seen. The themes are strong – the mind versus the body, the mind versus machine, and the extremes of exhibitionism.

I feel as though this story changed me in some fundamental way, but I’m not sure what it is yet – and this is what great stories do. But I think if I had to draw any conclusions, I’d say it’s about just how much we don’t understand – even when everything seems to be on display. I think the main question it’s asking is quite simple: what is real? This story does a beautiful, thought-provoking and mischievous job of not telling us.

“Trixie and the Pandas of the Dead” by Eugie Foster isn’t a great story, in part perhaps because it’s sitting next to a masterpiece. Trixie is a god of wrath who lives and floats amongst mortals, using the latest digital technologies to aid her. She smites down a prejudiced man, and is surprised to find his son is grateful – so grateful in fact he invites her to his wedding. This incident triggers a crisis in Trixie, and so she calls on Bo Bae, a fellow god, for advice.

I found this story endearing in some ways but weak in others. There are rich themes here – race, revenge and the mortal versus the immortal – but bland plot and narration let it down. I also struggle with the story’s attempts at humor. The gods are going around talking like the current youth generation – using words like ’emo’ and ‘totes’ – and it’s so overdone. It felt like the author was trying too hard to normalize the gods in order to make them believable. But for me it was cringeworthy, and alas, had the opposite effect.