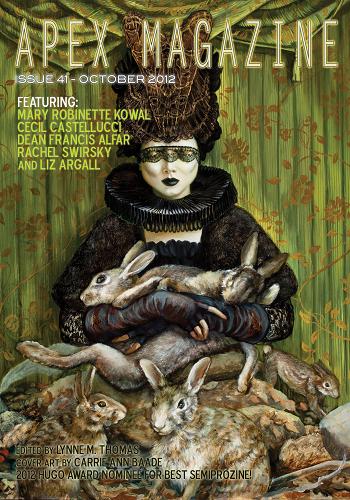 “Always the Same. Till it is Not” by Cecil Castellucci

Cecil Castellucci isn’t the first writer to tell a zombie story from the point of view of a zombie, but her “Always the Same. Till it is Not” breaks new ground for me, anyway. At first, it isn’t apparent the story is about a zombie, but then again, at first it isn’t apparent the story is a story at all. I almost mistook it for a poem, albeit a bad one, before realizing what Castellucci was doing was experimenting in the depiction of zombie consciousness. The story is narrated in the briefest of sentences, if you could call the telegram prose sentences at all. I was reminded of James Ellroy immediately, so once it became clear the story was being told by a zombie I had a giggle the author might not have intended. Maybe Ellroy is a zombie – that would explain his ethics, at least. Castellucci’s zombie gradually becomes aware of both his condition and what he used to be and, as his awareness grows, so does his vocabulary and syntax. The zombie’s growing articulateness coincides with a growing desire to transcend his condition. Regaining his humanity, he feels the need to protect those who mattered to him as a man, and do again. To do so, he needs to impart reasoning to the rest of the zombie horde.

What I find most interesting about this story may or may not have been part of the author’s intent: the connection between language and consciousness. A great many philosophers follow Wittgenstein (who in turn followed Nietzsche) in arguing that consciousness is not possible without language. This isn’t a frivolous issue – think of its implications for animal rights, for instance. Is Castellucci’s zombie capable of reasoning because it has words, or vice versa? The story is an interesting experiment in the merging of style and content, and its theme flows from the way the two interact.

Mary Robinette Kowal’s “Weaving Dreams” is much more straight-forward in its language and storytelling, and concerns the academic study of the Fae folk. It’s a why-didn’t-I-think-of-that concept: given that faeries exist, of course they would be the subject of study by anthropologists, historians, psychologists, biologists and more. Yet I’ve never seen another story approaching them from this angle. Of course, the story isn’t in itself a study of the Fae, which would be an endeavour for Jeff Vandermeer or Alasdair Gray, perhaps. “Weaving Dreams” is a tale of cultural misunderstandings and has echoes of the colonization of the Americas with its devastating effect on Native Americans. It proposes that European faeries came to the Americas and commingled with the Fae folk already native to the lands with no ill effects, but the humans studying them inadvertently bring deadly contaminants to the community. All of which is just the interesting background to a story of contact, kidnapping, vengeance, and obligation, as one academic team screws up in their dealings with their subjects and need to take drastic measures to set things right. They don’t entirely succeed, which makes this fantasy of misunderstanding all the more believable.

“Simon’s Replica” by Dean Francis Alfar uses the overblown language of typical fantasy, the courtly titles and graces, in a world with cigarettes and cars, leading me to suspect that perhaps the hyperbolic prose (hardly a line goes by without adjective and adverb) is a bit of a parody. In this story the elderly queen of a prosperous country, concerned her success will be forgotten with her, commissions her greatest artist to create a replica of her kingdom in art, the only discipline capable of memorializing for the ages. Unfortunately, each of the artist’s attempts are rejected by the queen as not grand enough and, as her health fails, he struggles to live up to her expectations. The ending, while predictable, is cause for meditation about the relationship between art and reality, and that’s never a bad thing.