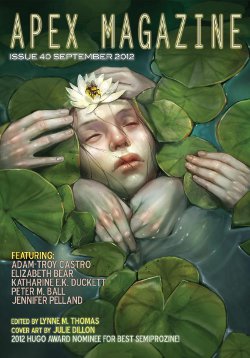 “During the Pause” by Adam-Troy Castro
“Sexagesimal” by Katharine E.K. Duckett
“Sacrifice” by Jennifer Pelland

In addition to Apex’s usual two original stories, this month includes two reprints. I’m not entirely sure why except that they complement the unspoken theme of the issue. This month’s Apex is brought to you by none other than the Grim Reaper.

Adam-Troy Castro’s “During the Pause” is a gruesome public service announcement about the end of the world, delivered in measured and formal prose with a touch of cold humour reminiscent of Barry Malzberg. The enigmatic narrator(s) spell out in gloomy detail all that awaits the human race (presumably we are the recipient of this warning) – not just the end, but eternal torment. However, while nothing we do can save ourselves from utter annihilation, if during our death throes we are feeling generous, we could opt to save the next species down the line – our narrators, of course. The mechanism by which we can save this species involves making our own end infinitely more unpleasant, but other than that it’s rather sketchy, but then, so is the entire rationale for our eminent destruction. The story is pretty much an extended version of some strange childhood game of “what if?” Will humanity have the nobility to suffer eternally to save a species of complete strangers from the same fate?

Essentially, “During the Pause” asks an unfathomable moral question and removes the question from any familiar context. Religious, philosophical, even sociobiological scholars have experimented with frameworks for understanding moral choices and offering a rationale for why we make them – why and how the moral choice also is in our benefit. Castro asks if we would make the moral choice knowing not only that we would not benefit in any way, but would in fact suffer even more as a result. The problem is, this is a question more for an elementary philosophy text than a short story, and none of the frills provided in the description of the dilemma justify having asked it.

“Sexagesimal” by Katharine E. K. Duckett is a massive, sprawling enigma about the afterlife in which dead characters slowly relinquish their memories, fading gradually into something else – some post-afterlife puzzle never described. Memory is currency, here, the only thing of value. The prose is luminous in places, such as the opening “You can see summer from here,” said Zoya. “On a clear day, anyway. And September’s a ten-minute walk.” And in places touching and humorous, “I can’t believe you had to go and die before Firefly, man.” The piecemeal, non-linear construction of the story makes it a kaleidoscope of images and emotions, most of them bittersweet. It’s like a combination of Ray Bradbury’s dreamy Martian heaven and the dissolution of Philip K. Dick’s Ubik, but the sinister overtones are purely personal. There are no Martians lurking here, no time-eating Jory – just the slow dissolution of personalities hiding the unpalatable truths generated over a normal life from themselves.

The effect of the story is moving but at times the canvass is just too large. Even with its frequently gorgeous prose, “Sexagesimal” contains a tad too much, like a museum exhibit that induces as much fatigue as delight. It may be that this story suffered from the online format: with a printed copy, I could imagine going back to it time after time, dipping into different passages and getting a richer experience.

Jennifer Pelland’s “Sacrifice,” reprinted from Dark Faith: Invocations (Apex Publications, 2012), combines something of both the previous stories. A grieving daughter, waiting at her father’s deathbed, is given the option to change places with him. The sudden offer is a response to her father’s silent prayer  — he would give anything to live. The narrative switches back and forth between the characters as they debate and dwell upon the reasons for and consequences of this macabre choice. It’s a more humanized version of the vision presented by Castro and so, despite the preposterous premise, a more believable and hard-hitting one. What would we give up for someone we love? What would we give up to live? Both possible answers to the dilemma are explored in this story, and the author finds both options not only inadequate but outrageous: as if the kind of being who would propose such a trade – be it God or author –would be by necessity monstrous. In essence, the story rephrases Nietzsche’s statement “It is true that we love life: not because we are used to living, but because we are used to loving.” And finds in it the corollary – if we love life because of the loving, that which would deprive us of our beloved is worth hating.