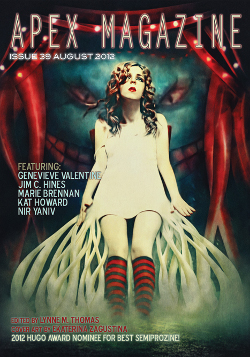 Dreams can inspire us to the greatest of heights, or drag us down below the lowest possible crevasses. In dreams, anything is possible, everything is attainable and logic follows its own twisted course that doesn’t need to make sense to be understood.

Madeleine L’Engle once wrote,  “In our dreams we are able to fly — and that is a remembering of how we were meant to be.” It’s true. Dreams are where our best selves can shake off the gravity of the everyday, spread our wings and leap into wonder.

Dreams also seem to be a recurring theme throughout the original fiction on display in August’s Apex Magazine #39, available now at its website.

In “Armless Maidens of the American West” by Genevieve Valentine, we’re introduced to a nameless narrator, probably female, in a small town near a golf course and a deep wood.

Everyone in town knows about the armless maiden. Everyone in town talks about what they’ve heard that she’s like. People wonder if she’s of an age to attend school, but figure she’s been out there for so long it doesn’t really matter any more.

The stranger is a woman who wants to talk to the armless maiden for a research paper she’s trying to put together. The paper is called “Armless Maidens of the American West” and it’s that which catches the attention of our narrator. Armless maidens. There are more than one.

Valentine, who authored the well-received “The Gravedigger of Konstan Spring” in the February issue of Lightspeed, seems to have thrown out the traditional story dynamic and, instead, experimented with something a little different. The story reads like a dream recounted for a disbelieving listener.

I say that in a good way. I don’t think the story would have worked if it had not had the overwhelming sense of a fabulation, a dream. Throughout the story, I kept having objections, angry that Valentine skipped right over what I considered to be a central element of the plot: If the armless maiden was real, why hadn’t someone actually helped her? Why did people allow her to be a myth and not a person?

And she does. Valentine does skip right over that. Once I finished the story, I realized she’d been completely right to do so. The dream sense of the story, the languid, flowing pace of it works with and compliments the more out there elements of the narrative.

Because it feels like a dream, we don’t question why the narrator feels so drawn to the armless maiden, how arms might be able to grow back. They just… are. And it works. It works really quite well.

If the story of armless maidens wove an ambiance of dream, then the next story dances into that ambiance, gathers the feeling of dreams about itself and wears the cloak of dreams as explicit as word.

“Murdered Sleep” by Kat Howard is about the death of sleep and, thus, the death of dreams, both personal and cultural.

This story also is told in the cadence and rhythms of dream, filled with inexplicable changes wrought by the mind of dreamers. Our narrator receives an invitation, on which is written only an address, but it is an address she knows to be home to the impossible made concrete and steel.

With the death of sleep imminent, the advent of dreamers is something to be envied, something of which to be jealous. Kora, our narrator, is one such dreamer.

She follows the invitation to an unassuming structure and passes through the doorway into the very essence of dream, following changing hands holding nothing, but casting light nonetheless. Once inside, she follows an enticing smell through scenes of random celebration, past actinic lights spilling under doors, past doorknobs radiating cold like a stove radiates heat.

At last, Kora finds the dance. She joins in, exulting in the freedom and the difference from her everyday life. When offered the choice, she leaves behind the everyday with a studied indifference, casting her lot, instead, with the cultural dream of the land of fairy.

Dreamers and dreams flow together, Kora dancing with the master of the wild hunt, until a dreamer falls down, his mask cracked, his body dissolving. It’s up to Kora to talk to the mask, to find out why the dreamer ended and what might have caused it.

Howard does a really good job in this story of incorporating the theme of dying sleep and what sleep itself might do to remain alive.

While the story was nice, I was most impressed by the writing. I kept racing forward, then going back to linger over some of the finer sentences. I’ve never seen a more wonderfully fun way with verbing than that displayed by Howard.

Take this next sentence for example. “The doors echoed shut behind her.” The doors obviously slammed shut behind “her,” but Howard isn’t content with telling us that. She throws in the result of the action as the verb, giving us a vibrant image to contend with.

Verbing isn’t the only way Howard plays around with words in the story. For instance, using the logic of dreams, Howard manages to synaesthesize the world around Kora, allowing the character to “smell the sunburned darkness of butterflies.”

Just wonderful words. Although the ending was, I thought, a bit obtuse, I don’t think that detracted from the tremendous tour through the death of sleep that preceded it.

The tale of Beauty and the Beast is an odd one, and one I’ve always found to be a bit troublesome when I stopped to think about it. The Beast has been cursed because he did not treat people, most especially women, well. He can only break that curse when finds a woman who will fall in love with him.

To accomplish this, he basically kidnaps a woman, forces her to stay with him and then, basically, brainwashes her to fall in love. It’s a storybook celebration of Stockholm Syndrome is what it is.

So, no, I’m not a big fan of the fable. Which is why I approached “Waiting for Beauty” by Marie Brennan with more than a little trepidation.

Almost a piece of flash fiction, this very short story tells the story of Beauty and the Beast from the Beast’s perspective, but with a decidedly different twist to it.

As short as it is, I feel like there’s not much I can tell you specifically about the story without ruining it for you. It’s a neat little twist that, while it was obvious from about halfway on, is in no way ruined by foreshadowing.

The last paragraph of the story is just devastating. Well done by Brennan, this is a very neat stinger of a story. Told mostly in description with a paucity of dialogue, the story still manages to move you along the familiar path, but also point out some different things to see along the way.

The night before the end of the world can become a strange time, indeed. In the modern, sun-blasted city of Tel Aviv by the ocean, full of vibrant, driven people, three strangers appear to three different people.

Each time the strangers are rebuffed and so Under Tel Aviv rises to take the place of its Upper twin and the residents of Tel Aviv and the city itself disappear into a gray nothingness, under a gray nothingness and surrounded by same.

The vast majority of the residents, though, come to get over the strangeness and live their lives as best they can.

One day, although not really a day because there is no difference between it and night, three no-longer strangers appear to the same three people with a different message.

“Undercity,” which was previously published in the “Early Edition” of the anthology The Apex Book of World SF 2 earlier this year, matches up well with the three previous stories in this issue of Apex in that it also is told in the fashion of a fable.

Yaniv’s prose moves with another example of the fluid changes seen and unquestioned in a dream, in the oddness of a fable full of talking animals where nothing is seen as strange. These things are simply accepted. Stories progress, lives move on.

Yaniv makes an excellent choice in how he tells the story in this novelette. The characters have no names, but only descriptions, or are described by their occupations. At one point, a new-born baby stays unnamed because, as her mother says, there’s no need for a name. In the now-Under Tel Aviv, names are unimportant.

While I think it works for the most part, it does make it harder to really connect with certain of the characters who come to be important to the story. There is a sacrifice called for in the last part of the story, a terrible sacrifice that must be made.

Because of the lack of names, these sacrifices seemed to lose a little of their meaning, to have a lessened impact on the readers. The loss of everything is easier to see when you have so little invested in the person who lost it all.

Still, despite some reservations about Yaniv’s methods, I think it’s another story well worth the time.

I congratulate the editors of this issue of Apex for collecting a nice batch of similarly themed stories. Go and enjoy.