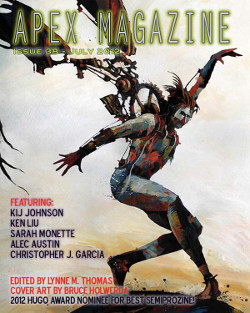 Apex Magazine from July has some familiar names and a mix of stories.

“The Silk Merchant” is a very strong effort by Ken Liu. Sanu is the son of a disgraced merchant in silk, whose father ruined himself and family in the search for the almost mythical “shimmer silk.”  But when he dies he gives Sanu some proof that shimmer silk does exist and, to redeem his family reputation (and to make his fortune importing the fabulously rare material), Sanu goes on a search, leading him to its mysterious island of origin.  A woman named Taya may know the secret place where the silk comes from, and Sanu is determined to find it.  This is a powerful story about love and betrayal that leads to the dark secret behind the material.  One of the best short stories I’ve read this year.

Alec Austin‘s “Ironheart” is set in the middle of an endless war, where Kade is a medic, turning dead soldiers into cyborg zombies to fight again.  Kade also remembers his time before the war when he was still alive and with his sister Blithe. When they are forced to retreat, he runs into her again, with complicated results. The situation is interesting (if not exactly new) but I found the information on Kade’s background confusing and essentially the story doesn’t do enough to keep my interest.  I think that’s because it doesn’t really resolve anything between him and Blithe.

Coyote stories are generally not my thing, so I was a bit nervous about “Coyote Gets His Own Back.”  The narrator views Luther, his boss on the ranch where he works, shooting a female coyote.  Luther is then visited with trouble of a more-than-normal nature, tied in with the coyote he shot.  Sarah Monette‘s story worked well because it’s simple and short with an ending that makes sense, and the coyote is not just a trickster figure.

“Wolf Trapping” continues the canine theme.  Richard Montaigne is a biologist who studies wolves and, in the winter, he discovers Addie Frazer, who takes that idea to extremes.  Addie wants to become part of the wolf pack and is willing to do anything to achieve that.  While Kij Johnson‘s story is well handled, it left a bad taste in my mouth.  I think the point was that Addie was supposed to be an admirable character who is living her dream, but to me, she is just plain insane (a fact that Richard notes).  The ending seems to me to be proof just how crazy she is, and Richard’s reaction to it seems cold and heartless when it is probably intended to be sympathetic.