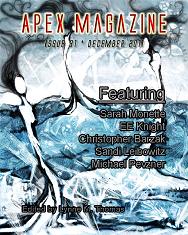 My experience with online publications is slim (What? The twenty-first century? Are you sure?), but, in-as-much-as I’ve read enough of them to spot a trend, they seem to lean towards brevity. Just a couple of stories, perhaps a reprint, some poetry and non-fiction. Since reading online, for some (including me), has never stopped feeling like a chore, that’s probably for the best. Unfortunately, it means there’s an awful lot riding on just two stories.

This month, wouldn’t you know it, the month I get the assignment to review Apex Magazine, probably isn’t the strongest month in the periodical’s history. The first story presented for our reading pleasure is “The 24 Hour Brother,” by Christopher Barzac, the Richard-Matheson-esque tale of a child who grows to adulthood and old age within two days of birth. The story is told from the perspective of the newborn Joe’s briefly older brother Lewis. Putting the story into the hands of the older brother, rather than one of the parents, is an inspired choice, allowing the writer to build in an initial reserve and apprehension, later shifting into affection and concern. Told by one of Joe’s parents, this story would have to verge on overwrought melodrama in order to ring true. Instead, Barzac is able to describe the frightening, sometimes comic, and of course ultimately tragic progress of Joe from, literally, birth to death, with a  balance of emotion and detachment. The main problem with the choice of narrator, though, is its effect of making Barzac’s powerful prose seem unrealistic. At Joe’s birth, fifteen-year-old Lewis describes his smile as “the gummy, wry smile of a little old man,” a description I enjoyed even while finding incongruous. The ending, as well, seems a little unlikely and, compared to the profound and emotional penultimate paragraph, unnecessary.

Strangely, Michael Pevzner’s “Faithful City” suffers from the same problem of narrative position contrasting with prose, although more intensely. Aside from an awkward lurch in and out of the past tense, this story is told in the present tense, again by a youth. The unnamed protagonist, living in a post-apocalyptic future, feels the call of “The City,” that legendary place where the selected, the hope for humanity’s future, dwell in luxury. The story follows the boy’s epic journey but is, unhappily, just too epic. The descriptions are conveyed in prose too lush for the setting (“In the east, the sun is already rising, making its way through the polluted clouds like an old sick man walking with a wan flashlight through an endless landfill, carefully choosing where to position his leg with each step.”) and for the narrator’s rustic youth. Ultimately the story is just too heavy for its slender frame – the journey includes too many events and irrelevancies, too much metaphor and overdescription, on its way to an ending I had predicted almost immediately. Pevzner’s command of language and imagery clearly point to bright things when exercised with greater restraint and in the service of a more delicate and capable plot.