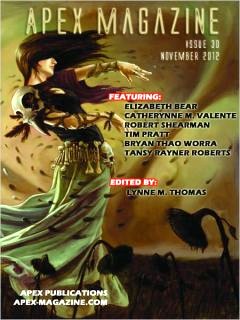 “The Leavings of the Wolf” by Elizabeth Bear
“The Bread We Eat in Dreams” by Catherynne M. Valente

Elizabeth Bear‘s “The Leavings of the Wolf” has a slow but effective beginning. We learn Dagmar Sorensdotter is an unhappy woman, unhappy with the failure of her marriage, unhappy with the forty pounds she has gained, unhappy how these two events now monopolize her life and thoughts. Her wedding ring has become the painful symbol of that failure. She wants more than just about anything, to get the ring off her puffy, swollen finger.

After a long absence, Dagmar takes up running again. Her weight causes foot problems, knee problems, hip problems, and she is embarrassed by her tight clothing. But Dagmar perseveres. Her health improves. She pushes herself to keep going.

Dagmar follows the same route when she runs every day. She is accompanied by a murder of crows. They follow her, circling overhead. She recognizes some of them from an animal research project. She believes the crows recognize her too. On one daily run, she follows the crows and they lead her into a steep ravine and eventually to a beach far below.  Once there, Dagmar realizes a piece of broken glass has cut through the sole of her running shoe and into her foot.  She is bleeding.  Her hands are more swollen than usual.  The wedding ring is very painful. Her finger bulges around it.

Perhaps Dagmar hallucinates. Perhaps she is depressed or delirious. Maybe it’s the endorphins from the exertion of the run – she sees a one-armed man. He claims to be “Týr-valient, king-of-giants, Týr Sorensdotter, the-leavings-of-the-wolf.” He tells her he sacrificed his right arm to the wolf in battle. “When you put your hand in a wolf’s mouth, you must understand that you have already made the decision to sacrifice it.”

Dagmar sticks her ring finger into her mouth and bites down. Gagging from pain and the taste of blood, she strips flesh and knuckle away along with the ring, and spits that symbol of failure into her hand. She throws the ring toward the waves, where it is salvaged by one of the crows. The crow flies away with it, screaming.

Strong writing. Creative and effective descriptions. Sympathetic character. Enjoyable. The tale is full of symbolism and imagery and it held my interest. This could easily be the first chapter in a novel.

“The Bread We Eat in Dreams” by Catherynne M. Valente

For instance, on page one we read: “You wouldn’t know it to look at the place, but a demon lives there.”

The demon has no gender, but since the demon chose the name ‘Agnes’ the local people believe she’s female.

On page four, we read: “They burned her as a witch some forty years later.”

But this is followed by lengthy descriptions of human failings, selfish acts, religious bickering, cruelties and the gossiping good folk found in typical small towns, and it goes on too long.

We finally arrive at the demon’s trial. She is found guilty, of course. The ending is delightful. It’s perfection. Decades have passed and the people who burned her have paid a terrible price.

At the very end of the tale someone asks Agnes a question I wondered about too — why a demon would choose to leave Hell. Want to know what Agnes says?  Read the story.