Apex has reached its 23rd issue. They print two new short stories a month and a pair of reprints. The two new stories this month are by newer writers to the field.

Michael Deluca sets up a potentially interesting society in “The Eater” but does not explore it enough to grab the attention. There is a tribe (possibly post-World War III) that survives through the naming of things. If a thing can be named then it can be understood. The tribal guide is called The Speaker. She names things and through chants has her people memorize these words. Her opposite but more ambivalent leader is The Eater. He does the testing of new things in order to bring back new things to be named by The Speaker. A young tribe member follows the eater in order to become his apprentice, but finds that the awful realities of his world are too scary for her to accept.

It is an interesting set up but far too elusive to be a full fledged story. As well, the prose itself is not striking enough to linger in the mind.  There are interesting observations of what it is like to be The Eater (the creator/destroyer figure) and The Speaker (the thinker/storyteller figure), but not enough is revealed in this slight story for it to be memorable.

Nebula Award winner Eugie Foster, however, brings us a fable with a heart of pure anthracite in “Biba Jibun.” She writes evocatively in this short which is a continuance of her Japanese fables brought forward into modern day Japan. This is the story of orphaned Rinako as she deals with modern day Tokyo. Tokyo turns out to be a nightmare for the country girl. Her only friend, Yumi, believes in biba jibun or “Viva la self” as it is explained. She brings Rinako into her own sphere and gets her to truly live for herself.

Rinako’s father thought her mother was an obake – an animal spirit; specifically, a rabbit spirit. How this spirit world intertwines with the horrific life she is living in Tokyo makes for a powerful if unpleasant story.

Apex seems to be a magazine that takes chances with new writers and unusual story telling. In which case, I applaud it. 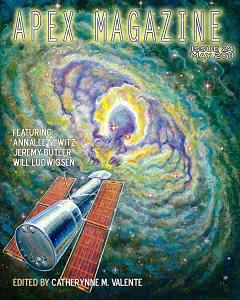 “Recipe Collecting in the Asteroid Belt” by Jeremy R. Butler
“Twilight of the Eco-Terrorist” by Annalee Nevitz

This issue of Apex contains two stories by authors that are new to me. One is well written and disturbing. The other just doesn’t quite work.

“Recipe Collecting in the Asteroid Belt” is one hard-hearted short story. Written by Jeremy R. Butler, it takes place in the near future and is about a young boy who is lured into the adventure of asteroid mining. He blames his 8 years alone as an “asteroid wrangler” on Smilin’ Joe Ferese. Smilin’ Joe was a real hero to the young boy, who read of Joe’s thrilling space adventures recounted to a loving public. All the kids wanted to be him or one of the other heroes of asteroid mining program. Needless to say, when the kid grows up and follows his hero into space, what he finds there does not meet his expectations.

This story, obviously, mirrors the “be the best you can be” PR of the marines. However, to me it seemed to be speaking about the SF field as a whole. It feels as though Mr. Butler is saying that we have followed our perfect SF heroes from the writings of Doc Smith or Heinlein down a rabbit hole and that adventure goes to the first, leaving nothing but vicarious adventures in their wake. An adventure that does not fill our need for that sense of wonder we once had. This probably speaks more about me than the story. But the fact that it is written well enough to get me thinking makes it a well handled one. But depressing as hell.

The second story is not as interesting. Annalee Nevitz in “Twilight of the Eco-Tourist” posits a young super hero discovering her talent to dissolve things into nothingness. She experiences this first, to her horror, by dissolving her boyfriend and the car they are making out in. She eventually becomes “The Eco-Terrorist” working for a green movement at college. First of all, I am very tired of super hero stories so it will take an excellent writer to lift me out of that predilection. Nevitz is not yet a good enough writer to do that. Her prose isn’t bad per se, but it lacks enough snap to draw me in. The writing seems to be tongue in cheek yet tries for poignancy at the same time. These modalities co-exist but never truly meld. The story is neither funny nor poignant but in some weird in-between state. It never quite gels.