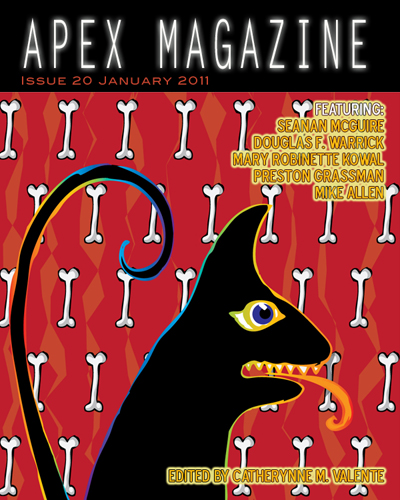 “The Itaewon Eschatology” by Douglas F. Warrick
“The Tolling of Pavlov’s Bells” by Seanan McGuire
“Tomorrow and Tomorrow” by Mary Robinette Kowal

“The Itaewon Eschatology” by Douglas F. Warrick is about an American living in South Korea. He has a relationship with a prostitute he calls Alice. His friend and fellow performer, Kidu, owns a book that teaches real magic tricks, and they spend their nights performing in Itaewon, certain the end of the world is upon them. The protagonist deals with his angst, his relationships, and the imagery he visualizes around the end of days.

This is the third story in less than a year I’ve reviewed that features an Asian prostitute (I think Russia qualifies) and an emotionally-stunted man. I guess someone likes the theme. It might be nice to see it done from the hooker’s point of view, or at least to see that character developed.

“The Tolling of Pavlov’s Bells” by Seanan McGuire is the diarized account of a doctor’s choice to unleash not one, but many virulent illnesses on the world, presiding over the destruction of humankind.

The endgame is obvious far too early for my taste. Each successive entry is just more elaboration of the same point. I hoped for a surprising twist to redeem it, but was disappointed.

In “Tomorrow and Tomorrow” by Mary Robinette Kowal, Tuyet is a cleaner for an upscale couple on a space station. She believes its her best hope to buy her son a new set of lungs. Her problem is solved for her, but requires her to pay a price she’d never imagined.

The premise struck me as a bit absurd, a case of future technology butting against nineteenth-century attitude. It lessened my empathy for the character. The outcome is obvious before the reveal, but the story has a plot and Tuyet is forced to make a choice. Those are pluses.

“Tomorrow and Tomorrow” is a reprint. The story first appeared in Gratia Placenti in 2007.

If your taste runs to vivid imagery over plot, you may enjoy this issue.