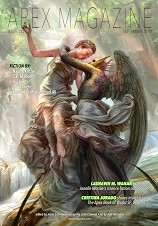 “Field Biology of the Wee Fairies” by Naomi Kritzer

“River Street” by S.R. Mandel
“Coyote Now Wears a Suit” by Ani Fox
“A Sirens Cry is a Song of Sorrow” by Stina Leicht
“Talking to Cancer” by Khaalidah Muhammad-Ali

“Field Biology of the Wee Fairies” by Naomi Kritzer

Thinly veiled as a fantasy, this is a story about a high school girl, living in 1962, challenging the norms of acceptable male/female roles.

Fourteen year old Amelia is a rebel. Self-admittedly homely, with crooked teeth, thick glasses, and unappealing hair, she has no desire to catch her fairy; something other wishful, pubescent girls do in Kritzer’s fantasy world. Even though fairies make girls more attractive to boys, Amelia would much rather spend her time on science projects.

Because the story takes place in 1962, a particularly unliberated time, Amelia is prevented from joining the boys-only science club by a chauvinistic biology teacher, Mr. Crawford.

Wanting to become a scientist rather than a beauty, the teenager ignores her fairy when the two finally meet. Being persistent, the fairy continues her badgering until Amelia captures her in a jar.

Inquisitive Amelia makes the fairy her next experimental subject, requesting information in exchange for freedom. What the fairy tells her changes the direction of her life.

In the beginning, Amelia appears to have no interest in other people. However, when Betty, a beauty who obtained her fairy at a very young age, shows interest in Amelia’s science project, the two become friends. Betty drifts in and out of the story but is ultimately transformed by Amelia’s strength of character. She morphs from a girl interested in hair styling to one who joins a girls-only science club.

As a character, Amelia is particularly interesting for her eccentricities. She has a decidedly mean streak, as seen when she throws a heavy math book at the head of a taunting boy. She is also frighteningly cold and calculating. For her science project, she tests mice in mazes, and at the end of each session, takes them to the zoo and watches with great interest as they’re eaten by boa-constrictors. And then she’s surprised that others don’t share her fascination.

I thought the depiction of Amelia’s mother was exceptional. An educated woman, she never manages to build a career for herself in a male dominated workforce. My mother and so many of her friends could be this same person.

I do think the author was a bit heavy handed in her depiction of downtrodden girls. As a middle-schooler in 1962, my recollections are far different. Of course, there were the popular kids who cared nothing about academics. However, the real brainiacs, the true math geeks, they were all girls and were revered for their excellence. Why they never retained that status always puzzled me.

In the middle of an idyllic little town, the narrator implores you to walk along River Street; a route that is not only pleasant but will invariably lead you to wherever you need to go.

Everything about the walk is pleasant. The boulevard meanders through rolling hills and past quaint homes abounding with yellow lilies. However, a neighbor’s friendly wave foreshadows a change.

Smells of decay begin to invade the street’s floral scent. Lights begin to flicker. You move faster and faster along an increasingly descending path, barely in control. At a staccato-like pace, glimpses of strange images whiz by as you near the end of the road.

The ending is decidedly mystical, and its meaning will depend on your individual experiences. For example, I saw the journey along River Street as a metaphor for discarding an old self in order to be reborn, much the same feeling I had when walking the Camino de Santiago.

“River Street” has no single interpretation, and that’s good.

I was immersed in Hawaiian culture from the start of this 5,400 word story. It’s written in a voice that is decidedly ‘street,’ something that was both believable and felt right. One note of caution, however. If you are a mainland haole, there may be some phrases you find incomprehensible. For example, “Jes cuz he patted May’s ass no make him a dawg.” I still don’t know what that means.

Upon receiving a call from his cousin Kaipo, the unnamed main character (MC) goes to a Honolulu police station to bail out his relative, Coyote, an animal/god/family member. Dressed in an Armani suit, Coyote seems to see inside the MC, detecting his sexual orientation, alcoholism, and gambling tendencies. He even knows about the MC’s acceptance into Harvard graduate school.

After posting bail, and while Kaipo speeds away from the police station, Coyote finds methamphetamine in the glove compartment. In the ensuing chaos, their truck crashes off the road. Police find the truck upside down in a sugar cane field, covered with meth dust, and inside a sawed-off shotgun.

The three are thrown back in jail, whereupon throngs of elderly relatives show up at the station to create havoc in what is locally known as “a Wailing.”

During the disruption, Coyote escapes, Kaipo is taken to the hospital following a heroin-filled balloon bursting in his stomach, and the MC is subjected to an MRI for head trauma.

As Coyote moves in and out of the story, it’s plain that the MC sees him differently than the rest of the world. To everyone else, he is cousin Mica, but to the MC, he is the god of the Sioux, the ultimate trickster, and mischief-maker, disguised as a wolf dressed in absurdly fine clothing. It’s unclear if these are hallucinations, visions, or manifestations of a concussion. That’s for the reader to decide. One thing is clear, however, Coyote is the catalyst that allows the MC to reveal long held secrets to his family.

In the final analysis, “Coyote” is a gritty story about poor, tourist-supporting natives living in Honolulu, and a youth who, with the help of an unexplained source, finds his way to a better life.

“A Sirens Cry is a Song of Sorrow” by Stina Leicht

In this gentle but painful story, Jill is a young girl who, because she’s been raised in a strict catholic home, has been taught that women are inferior to men. She never comes to grips with that doctrine, believing that even Mary wished for more freedom.

With advertising, television, and movies conspiring to keep her in her place, she longs for something else.

Summer is the time she escapes the bullying, name-calling, and other abuses heaped upon her by elementary school boys.

Chlorinated pools smell like salvation, they are the places she goes to find peace.

When harassment becomes too much, and due to their love of the water, Jill and her younger sister Alex go to a psychic/fortune teller and ask to be turned into mermaids.

A shock runs through mystic Helena when she takes Jill’s hand to comfort her. It appears Helena sees evidence of abuse because she offers to call the police. It’s unclear if child abuse actually occurred because the two girls flee before the issue is pursued.

A week later, a box from the mystic arrives containing instructions and necklaces with vials of liquid attached. If the sisters travel to a body of salt water, follow the instructions, and then drink the potions, they will be transformed into mermaids.

Jill is torn. As much as she hates the constant abuse of local boys, and the thought of mermaid freedom is enticing, she still secretly wants to become a woman. She and Alex wait and eventually forget about the offer. Four years later, both girls are abducted by a man in a Buick. Jill manages to escape, but Alex is raped and found dead in a bayou. Strangely, the liquid in her vial is empty.

After another three years of guilt and anguish, Jill pursues the mystic, long gone from her previous address. When the two finally confront, Jill learns something about Alex that changes the rest of her life.

What’s interesting about this story is that it’s not really Fantasy or SF; it’s simply the story of a girl growing up in a very troubling world. Since the reader only sees the elements of fantasy through Jill’s thoughts, it’s never clear if they’re real or not.

As the story unfolds, women’s rights are explored via Jill’s probing questions. The author does a beautiful job showing Jill’s growing maturity through the content of those questions.

Why did The Little Mermaid have to adjust to the Prince, growing legs and learning to talk? Why couldn’t the Prince grow a tail?

Why, when boys touched her inappropriately, was she told, “Boys will be boys?”

Why would god let such inequality happen?

For all its beautiful descriptions, wonderful pacing, and truly memorable characters, I did have one particular issue with “Sirens.” The story opens with Jill recalling a museum visit where she viewed skeletal remains. The problem is that she was only one year old at the time, an age too young to form such concrete memories. It took me a while to get over that blip, but thankfully, over it I got.

“Talking to Cancer” by Khaalidah Muhammad-Ali

What could be more uplifting than a tale about someone who can cure cancer simply by telling it to stop? When emotions get between giver and recipient, as occurs in “Talking to Cancer,” the story gets more complicated and darker.

Eight year old Layla learns of her cancer-curing gift after saving her mother’s life moments before her death. When Layla grows older, she establishes a business, complete with an infomercial, touting her life-saving abilities.

One day, Hiba, a patient who has already undergone three unsuccessful chemo therapies, shows up at her office. For unexplained reasons, Layla takes an immediate dislike to her new patient but treats her nonetheless.

Hiba returns, her cancer worse than before. When Layla recognizes an elephant charm hanging from her patient’s neck, she realizes why the treatment isn’t working. Many years before, her foolish husband had recorded a lovemaking session with this same woman, wearing the same charm.

The story jumps to Layla’s school days and the point where she meets her to-be-husband, Moody. During the early days of their marriage, they lived in a cheap apartment, saddled with Mark, their annoying cigarette-smoking, poor dog-owning neighbor. Eventually, his inconsiderateness pushes Layla over the edge and she wishes lung cancer on him.

Horrified, she watches Mark as cancer eats away his body until he can no longer care for himself. As best she can, Layla helps her dying neighbor live out the rest of his days.

Now back in the present, Layla visits nearly-dead Hiba at her home and finds Moody taking care of her. At this point, Layla realizes that Hiba has known all along about their marriage, but was still brave enough to ask for help. After living through the guilt of Mark’s death, Layla embarks on the only course of action she can take.

While I liked the premise of this excellently written story, I felt more could have been done with it. I expected Layla to be exploited in some way, to create more than just personal turmoil. It was also too much of a leap of faith for me to believe that Layla’s gift wouldn’t have been more widely recognized and utilized. Why oncologists would only refer their worst terminal cases made no sense. Why not save these patients the agony of chemo and radiation treatments.

Also missing was any mention of how Layla obtained her gift. Minimally, the scientific community would have been curious and probably would have turned her into a very unwilling test subject.

Then again, that would have made it a different story.