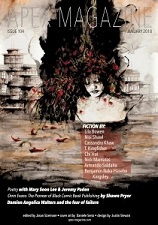 “Asylum of Cuckoos” by Lila Bowen

This special double-sized issue offers half a dozen stories, ranging from a past that never was to futures near and far.

“Asylum of Cuckoos” by Lila Bowen is a Weird West yarn featuring a Ranger who can change into a hawk. On a quest with equally strange companions, he lands in jail when they arrive at a small town. It turns out that a doppelganger stole his appearance, and the locals intend to hang both of them as horse thieves. Part of a series, this story will be better appreciated by readers familiar with other tales involving the same characters. The Ranger’s companions play almost no part in the plot, and the resolution is simple and anticlimactic.

“To Blight a Fig Tree Before It Bears Fruit” by Benjamín Naka-Hasebe Kingsley is a brief dystopian story. Technology allows the consciousness of the elderly rich to enter the bodies of unborn children. The author presents this concept in a particularly disturbing way. This grim vignette is powerful, if unpleasant to read.

“A Night Out at a Nice Place” by Nick Mamatas is a strange story about incorporeal entities who take on a physical form and go on a dinner date with a human woman. A philosophical discussion ensues about the nature of various kinds of reality, ending in a transcendent conclusion. The narration is dense, with weird concepts interrupted by small jokes. It is often difficult to follow.

“The Heaven-Moving Way” by Chi Hui (translated by Andy Dudak) follows the adventures of a woman who steals a starship in order to find her brother. He travels far into space in order to find out why all alien civilizations have died out, leaving only ruins. Together they make an awe-inspiring discovery. This story is an old-fashioned space opera at times, but ends with a vision of vast distances and immense lengths of time.

“Symphony to a city under the stars” by Armando Saldaña takes place in a future of highly advanced technology. A woman leaves the man who loves her to journey throughout the stars. She returns years later to find out that she has changed, while he has remained the same. Futuristic concepts and a poetic style enhance a very simple plot.

The protagonist of “The Best Friend We Never Had” by Nisi Shawl is a woman who returns to the space station where she grew up in order to recruit her old acquaintances as passengers on a starship. This requires destroying their physical forms, placing their minds into data storage units, and later downloading them into cloned bodies. She has to win their trust, but betray them so they must choose prison or the starship. When she arrives, she learns the unexpected fate of one of her friends and changes her plans. The author creates a complex future and a plot with multiple twists and turns. The battle that occurs in the middle of the story seems a little out of place.

Victoria Silverwolf is surprised that only one of these stories is fantasy.