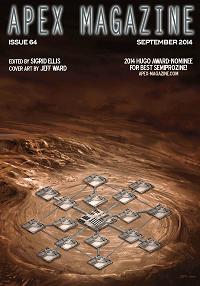 “Last Dance Over the Red, Red World” by Gary Kloster

As a final act before she dies, Saifa has traveled from Earth to meet and kill Konstantin. With him, she created a daughter, Minerva. Konstantin in his megalomania has allowed Earth to die from an incurable illness called the Death. However, he and his minions are kept separate and safe. When Saifa arrives at her destination, Minerva takes a moment to let her mother learn that Konstantin has used Saifa’s donated eggs to create another child. Minerva wants Saifa to spare that child when Saifa takes her vengeance on Konstantin. This post-apocalyptic, out-for-revenge story went on a bit long for my tastes and, rather than being fully resolved, left readers to interpret the ending, and any aftermath, for themselves.

“Economies of Force” by Seth Dickinson

Rade and Apona live in a time of the Loom—a disease of shared ideologies rather than of pathogens. Rade is the more flighty of the two, and has difficulty knuckling down to do what is necessary to become a productive citizen. Apona is more focused and believes she has learned how to interpret the drones that, without human intervention, determine how to cull the Loom from humanity and kill it off. After Rade loses his job as a stock technician, he joins Apona on a journey to photograph the drones at their macabre work, killing from afar. He believes she has somehow intercepted the drone network and is now able to predict where they are going to strike. Acting on his assumption, he tries to warn a town that they are going to be attacked. According to Apona, his warning stopped the drones from attacking that town in that way, forcing them to bide their time for another opportunity. The Loom is a backdrop against which life and automated oversight play out with fairly predictable results.

This is a fable about a feather that wants to be on the stage. The feather meets another; that feather claims superiority by virtue of experience. After begging for a chance for even a small role in the back of a boa, the first feather is tasked with finding a spotlight to shine upon the feather that would be mentor. Feather looks high and low, and finally finds something to satisfy the need. From that point, the story becomes painfully predictable. Unfortunately, this fable has no moral.

This story is featured in the new Apex Publications’ anthology, War Stories: New Military Science Fiction, to be published in October 2014. Told in the first person, from Jake’s point of view, it is a romance that concerns his intimate relationship with Tuvi, a soldier he meets on Earth, but who fights in a war several solar systems away. As such stories go, this one covers the emotional bases relative to new love as experienced by the military significant other’s perspective. Beyond that, there’s not much to it.