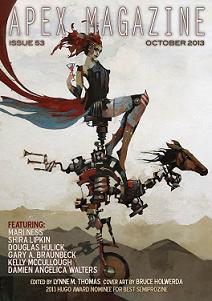 “Becca at the End of the World” by Shira Lipkin
“Grey in the Gauge of His Storm” by Damien Angelica Walters
“An Assault of Color” by Mari Ness
“Shatter” by Kelly McCullough (2003 reprint, not reviewed)

I feel like I should demand combat pay for reviewing this month’s issue of Apex Magazine, with its powerfully disturbing stories of pain and loss. But not everyone reads for the sake of light entertainment. Some of us like being troubled, being saddened by the fiction we read, and I’m generally one of those people. Stories that disturb and provoke often appeal to me, but they need to meet the same criteria of quality as any other story, of course. A raw emotional reaction may be an achievement, it may add to our appreciation of art, but it isn’t necessarily art in itself.

“Becca at the End of the World,” by Shira Lipkin, certainly has the makings of an intense and disturbing experience. It is told from the point of view of a mother watching her 16-year-old daughter, Becca, turn into a zombie. It is Becca’s wish that her mother record the transformation on film – and then kill her once she is no longer human. You can see from the start that this isn’t going to end well. The details of the zombie apocalypse are skipped over to concentrate on the immediate, personal horror of the situation, a focus I applaud. My main gripe, really, is that the story was too short – I didn’t become attached enough to the characters to be as moved as I would have liked. Then again, if I had loved these characters, perhaps the story would have been too overwhelming. As it is, it’s the thought of the situation, more than the ending of the story itself, that makes me grimace.

Damien Angelica Walters’ “Grey in the Gauge of His Storm” is a story about an abused woman. There is a fascinating metaphor in play here, whereby the unnamed protagonist is literally tearing inside as a result of the abuse she suffers from her partner. The lacy, fragile fabric that holds her together is disintegrating under his violent hands and, each time he tears her further, he stitches her up with the rough burlap from his own body. She thinks he is making her stronger, but in reality he is making her into an extension of himself, a possession. Her insistence that she loves him, that everything he does is for her benefit, is an insidious aspect of the abuse. He has made her into an accomplice in his crime; his psychological abuse transforms her mind into an instrument of his just as his physical abuse is remaking her body into an appendage – an object – of his own. Her physical disintegration, to be replaced by the stuff of her abuser’s body, is a powerful analogue for the process by which his power subverts – and substitutes for – her ability to think. This story is impossible to define, but leads me to think about Samuel Delany’s definition of science fiction as the genre that forces you to interpret language in such a way that the statements “her world exploded” or “she turned on her left side” have multiple possible meanings. In Walters’ story, the phrase “he was tearing her apart” becomes a reality in a way it could not in a piece of realistic fiction, and for this possibility we must be thankful to the genre. This is not an easy story to read, or to think about, but it is one that deserves attention.

The final original story in this month’s Apex, “An Assault of Color” by Mari Ness, somewhat lets down the side. It’s a fantasy story, a genre I’m not really a big fan of, but I have to admit, if I had encountered this story in a publication devoted exclusive to fantasy literature, I would be singing its praises. It only suffers here because it lacks the emotional punch of the preceding two stories. As an opener it might have been ideal. Ness tells the story of a woman who paints spells: her artworks contain the magical effects paid for by her clients. Her latest client, a terrifying creature whose distorted appearance causes pain in the viewer – causes, in fact, disruptions in reality – is paying to be cursed. The heart of this story is a meditation on beauty: what it is and if it is always beneficial or if it too could be considered a curse. There is much ambiguity to this story – nothing is said or explained; everything comes through by inference. Normally, I like that, but in this case I would have preferred slightly less elliptical storytelling. The theme of this story, though, reinforces its position at the conclusion of the publication, overseeing and ruminating over two stories combining beauty and pain to an extraordinary degree.