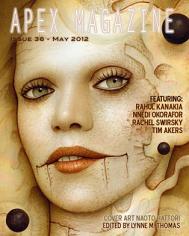 Apex is among the royalty of online magazines, so I was disappointed when, the first time I reviewed it, I was left unimpressed. In this, my second critical exploration of the magazine, I was hoping to be awed. I wasn’t, but the un-awing of Matthew Nadelhaft was informative and not without its pleasures.

“Decomposition,” by Rachel Swirsky, is a very long fantasy that I almost couldn’t finish. Not because of the length, but because it was so appalling. Which is not to say it was necessarily bad, just that it was very, very unsettling. The grotesqueness of this story sneaks up on you. The beginning is inauspicious, as the vengeful Vale pursues his quarry, the pious Berrat, through a casually-realized setting that read to me like it was lifted from a roleplaying game. Vale murders Berrat’s daughters, aided by a never-ending supply of magic charms, all of which seemed unnecessary – if not a bit like magical sonic screwdrivers – except to alert the reader that magic, in the world of the story, functions by holding charms under the tongue. Magicians here must have grown very adept at talking with their mouths full.

It’s what happens after the murders that gives the story both its meat and its gristle. Vale lugs the bodies back home with him. Fascinated by his trophies, he settles them like guests into his house and watches them decompose. From here the story grows more and more gruesome as we watch whatever once existed of Vale’s mental balance rot away as surely as the bodies he can’t bear to relinquish. Vale even procures charms for the bodies, allowing them a semblance of life, so they can become his companions. Unpleasantness heaped on unpleasantness. While the prose is strong, and the author must be commended for evoking a strong visceral reaction, this story wasn’t for me. But that doesn’t stop me from recognizing that to fans of the horrific and grotesque, it might well be an epiphany.

Rahul Kanakia’s “Tomorrow’s Dictator” (in retrospect, a very clever title) is a more subtle kind of grotesque, a tale about a future possessing the technology to adjust people’s attitudes and personalities. It’s not a novel premise, but Kanakia pursues it from a different, and chilling, angle. Sasha, the “dictator” of a collective populated by voluntarily adjusted workers, is attending a human resources (and the premise of the story lends that familiar phrase a very creepy subtext) convention, looking for someone to assist and eventually replace her. Tagging along is her adjusted husband George, a tragic and comic figure whose personality consists of little more than an adjustment-enhanced obsession for and dependence on his wife.

Most of the story takes place in an expository conversation between Sasha and a representative of a major chemical firm, both trying to headhunt the other. While the expository conversation isn’t a technique I particularly like, especially not when it constitutes the bulk of the story, this one reads well enough and paints a vivid and disturbing picture  (and, despite the science-fiction premise of the story, a disturbingly plausible one) of workers being adjusted so they are not just able to work 16-hour days, but want to. If that isn’t horrible (and believable) enough, the subjects undergo the process because they want it. Adrift in the soulless world of rampant, amoral capitalism and economic hardship (at least, for the “99%”), they find adjustment an alluring prospect, a way out of both financial difficulty and personal dissatisfaction. Sasha sees adjustment as a wonderful opportunity to make people happy; the cynical executive is looking for a means to ensure plant employees will never complain about working with hazardous chemicals. George represents one potential end-product of the process and is as disturbing – both in himself and in the way he is viewed by others, even Sasha – as the conversation between Sasha and the executive about creating the conditions to manipulate his workers into seeking adjustment of their own volition. While there is little real “story” here, there is a terrifying and effective critique of an economic and social world which could well be our future.

These two stories (and one reprint) made for an interesting magazine, but not the reviewing-highlight I had expected. At first I felt disappointed in Apex, until I realized what I had really learned from it: there are enough good stories and good writers to fill an entire marketplace. While individual issues of individual magazines might occasionally stand out (for better or for worse), overall, a reader can expect to be entertained, thrilled, horrified and cautioned equally by diverse and abundant stories all over the printed and virtual worlds.