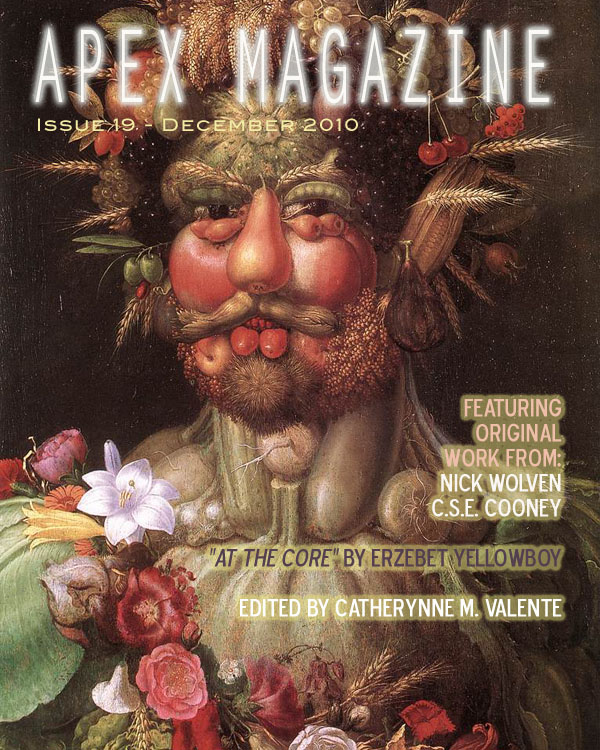 “Radishes“ by Nick Wolven
“Pale, and from a Sea Wave Rising“ by C.S.E. Cooney

In “Radishes“ by Nick Wolven, the author introduces us to an offworld colony with a very familiar problem: hunger. Melody and her husband (lover?), who is the story’s viewpoint character, are starving along with the rest of the colonists of Bayside. The colony’s government-supplied rations have stopped arriving and although the landscape is covered in profusely growing vegetation, none of it is edible–or is it? Maybe edible is just a state of mind.

The writing bothered me in several places; the author goes overboard in his use of similes, sometimes linking two in one sentence: “Green ropes pour out and drape me like scarves, and I can’t help myself, I scoop them into my mouth like noodles.“

He also has a tendency to over-describe. The scene where Melody loses her first tooth is painful, but after mentioning her missing teeth over and over again throughout the rest of the story, the idea loses its initial impact. The structure of many sentences is awkward, as in: “Melanie’s and my request for more protein is flatly shot down.“

Adding to the awkwardness is the fact that the author uses the name “Melanie“ when the character’s name is “Melody”. He does it again near the end of the story: “Perhaps it is not sadness, exactly, but awe, amazement, before the sheer invincible fact of Melanie’s face.“

There’s no excuse for allowing a mistake like this to occur twice. Extremely sloppy proofreading and editing.

On the positive side, I thought “Radishes“ was going to be another “perils of genemod food“ story, but the author takes it in a bizarre, completely unexpected direction. The core idea of the story is actually very good, but work was needed before publication.

In “Pale, and from a Sea-Wave Rising“ by C.S.E. Cooney, we meet Aquilo Vickeray Makepeace (alternately called “Quill“ and “Vickie”) an anatomy student in the early 1800’s. Quill is searching a stretch of beach after a terrible storm for washed up bodies he can use in his medical studies. What he finds is Marinette, a young woman who can only be an undine, or water nymph.

Quill has been cautioned about the undine by his sister, Babs, who has an unusual amount of knowledge on the subject. Yet, when Marinette asks Quill to find a boat so she can go to her brother, Marin, and Quill reflects on what advice Babs would give, he thinks,

“It’s simple,“ Barbara Caroline Makepeace would say. “Find a blasted boat, Vickie, and don’t be such an ass.“

His sister would really say this? It seemed to me her advice would be to get away from the undine as quickly as possible.

I appreciated the differences in the relationships between the two sets of twins, Marin/Marinette and Quill/Babs. Babs loves her brother, yet seems to enjoy teasing him and treating him almost as a child. Marinette loves her horrible brother almost to the point of obsession.

I think most readers will find “Pale, and from a Sea-Wave Rising“ well-written and entertaining.

Also included in the edition is a reprint of “At the Core“ by Erzebet Yellowboy (originally appearing in Fantasy Magazine, 2006), two poems, and lovely cover art by Giuseppe Arcimboldo.