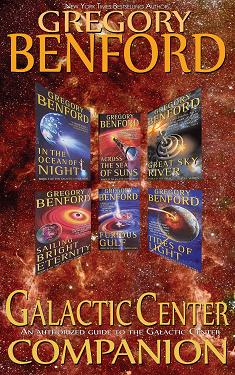 An Authorized Guide to the Galactic Center

Gregory Benford is an astrophysicist and prolific hard-SF author who’s published dozens of works over the last forty years, won Nebula and John W. Campbell awards in addition to being nominated multiple times for Hugos and yet more Nebula awards. He wrote the six novel Galactic Center series between 1977 and 1995, which postulates “a galaxy in which sentient organic life is in constant warfare with sentient electromechanical life” [Wikipedia], all while also publishing a variety of other SF books and professional scientific papers. The Companion is a collection of pieces Greg has written about the series over the years, plus a few related additions, all brought together here for the first time:

Benford’s writing style in the Galactic Center series comprises an intriguing blend of scientific exposition and conflict between organic and mechanical life. In “A Hunger for the Infinite,” I particularly appreciated his efforts to capture what a mechanical’s POV might actually be like since it represents a truly alien life form. Specifically, he hypothesizes that mechanicals would “think” in non-linear ways, unlike organics, and, for the two types of life forms to communicate, he shows various ways they struggle to bridge that gap. A common theme in a number of the novels is also the Mantis, a mechanical with a driving need to understand organic life by using them to construct bizarre, still-living art.

The Life at Galactic Center and Writing the Galactic Center Series sections are for the hard-core Benford fans. In these, the author does a thorough job of explaining how these six novels came to be and the space-based life ecology he envisioned might exist around the energy-intensive galactic center. It’s one thing to build a new world around a series of books, another to create an entire alien ecology. I’ve never read anything quite as extensive, covering everything from grazing photovores to predatory metalvores.

For those who revel in the scientific details of galactic astrophysics, the Galactic Center Astronomy section and Benford’s 1988 Astrophysical Journal article provide an in depth review of recent astronomical observations plus a comprehensive mathematical treatment explaining some of the features at our galaxy’s center. Warning: the math is intense, but the photos are fascinating.

The most compelling portion of this collection for me is the Perspectives, which includes two in depth reviews plus an interview. Both reviewers lauded Benford’s work and do an excellent job summarizing the plots and main characters in each of the six novels that make up this collection. Having not read these books in ages, these summaries reminded me of the tremendous scope of the series which spans over 36,000 years. The interview, though, provided me with the best insight into Benford’s work: In answer to the question “Will our species survive its (this century’s) wonders and terrors?” Benford replied: “Sure, easily. We’re mean, stupid, ugly and the terror of all other species—but we’re damned hard to kill.” With a philosophy like that, Benford’s stories will always tantalize, challenge and uplift. Thanks for a fantastic journey, Greg.

An essential work for diehard Galactic Center novel aficionados that will no doubt spark interest in those coming to the books for the first time.