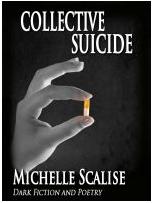 “I am the Shadow that Walks There”
“Evil Enchantments by Song”
“How Far We Fall from Grace”
“The Feel of Blue Lips”
“The Disinterment of Ophelia”
“The Dead Deeds of Poets”
“Patron Saint of Walking Ghosts”
“Blue Rose Tattoo”
“The Night Around Me, Falling”
“Black Train”
“Lunch at The Kibbey Crematorium”
“Cat”
“The Beautiful Ones”
“Visitor’s Day”

Michelle Scalise’s collection Collective Suicide contains a mixture of short stories and poetry, all what I would call horror, more-or-less. Most of these works are reprints, with two previously unpublished stories rounding out the book.

Scalise shows a great deal of interest in madness, particularly madness stemming from isolation. Most of her stories are about outsiders, people who, either because of their own peculiarities, their cultural position, or as the result of some terrible seclusion, are on their own and suffer for it. Scalise also, interestingly, writes almost exclusively in the first person – a technique often effective in promoting attachment to the narrator but also sometimes awkward – as in the story where the narrator kills himself in the end, a twist made no more believable by the story being told in the present tense.

“Patron Saint of Walking Ghosts,” the first of the collection’s previously unpublished stories, depicts a gloomy estate that was previously an orphanage, inhabited now by young Mercy and her grandmother, descendants of the orphanage’s founder. A journalist visits them to write about the orphanage’s dark past and leads Mercy to the realization that the doctor who worked with her mother performed medical experiments on the orphans using radioactivity. There is nothing supernatural here, but the sense of oppression is acute, disrupted somewhat by a predictable ending and some clumsy lapses in Mercy’s voice, which veers between creepily ignorant (think Deliverance) and Nancy Drew perspicacity.

“The Night Around Me, Falling,” the other original story in the collection, is its weakest piece. The only one written in the third person, it tells the story of Pamela’s encounter with a fortune-telling young girl on a flight from Los Angeles. Pamela is returning from botched cosmetic surgery which almost killed her. May Beth, in conversation with the dead, learns that Pamela was “supposed” to have died during her surgery, and so their flight is going all Final Destination on them. The writing is clumsy and the story progression both predictable and unbelievable. Seriously, if death is so all-powerful, how was it thwarted in the first place by one sub-par surgeon?

Fortunately, the rest of the anthology is of a higher quality, possibly because the other stories went through an additional stage of the editorial process. Taken as a whole, Scalise’s stories provide an interesting window onto the horror genre. In all genres, in all fiction, characters encounter setbacks and difficulties. In horror, probably more than in any other form of writing, their difficulties take the form of incredible suffering. Scalise’s characters are haunted by disturbing visions and ghosts (in “I am the Shadow that Walks There,” “The Disinterment of Ophelia,” and “Visitor’s Day”); they are badgered to madness and death; they suffer and die of illness and persecution and plain bad luck.

Because we believe in causality, we need to explain suffering: it is not enough that suffering happen; it must happen for a reason. So we tend to see it as punishment. When a character in a story suffers we look for an explanation for their suffering. What did they do to deserve it? This tendency raises problems in horror fiction, in which perfectly normal, innocent folk are visited with horrible encounters and circumstances. They did nothing to deserve it – but we look for flaws, crimes, and sins to which we can attribute their suffering. In some cases they are easy to find: one of Scalise’s protagonists has killed her mother, for instance. Two protagonists are homosexual: the demons they suffer could well be supernatural allegories for their treatment at the hands of oppressive societies. The reader, searching for a moral explanation to the existence of suffering, might conclude they were to blame for their own fate. But at the heart of this dark genre is the realization that suffering happens to all (“Even the pure of heart, who say their prayers by night…”). Maybe the point of horror is that nobody deserves their fate. Scalise’s protagonists are innocent of anything that should provoke suffering (even the woman who killed her mother, in “Lunch at the Kibbey Crematorium” – and then struggles hilariously to be rid of the body – does not suffer as an act of cosmic retribution for her crime). As Clint Eastwood said in Unforgiven: “Deserve’s got nothing to do with it.”

The strongest entry in this collection, “How Far We Fall from Grace,” is an excellent case in point. It tells the story of a family locked away in their own home because they are stricken with disease. Their former community has essentially walled them up to die, and we have to watch. Some of them are sympathetic, some aren’t. The parents are religious zealots who take to suffering all too naturally; the children are blameless. It is, in fact, the way the characters understand and approach their own suffering that largely determines how sympathetic they are. But none are spared. In this terrible world, the best a character can hope for, it seems, is the sympathy of observers who can record, but not end, their anguish.