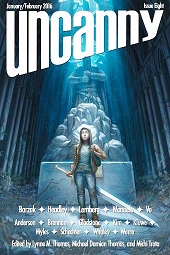 This issue of Uncanny delivers riveting stories of the unexpected and the bizarre, taking readers deep into the uncanny valley.

“The Virgin Played Bass” by Maria Dahvana Headley is a wonderfully dark bizarro tale of an insane talking cat who collects the narrator, accordion player Bruno, and then the three vicious Marys for his traveling miracle play in war-ravaged Europe. As the odd band travels, the war literally marches behind them, and the brutal destruction of war suffuses every part of the story from beginning to end, including not only the loss of lives but the loss of land, song, and intellectualism. Bruno’s nostalgia for his pre-war life provides sharp contrast to The Pet’s contemptuous antics. Headley’s “The Virgin Played Bass” is a bright conflagration built on references drawn from cultures and religions as to be sacrilegious. To learn more about the archetypes behind this story, you can read Uncanny‘s fascinating interview with Headley.

“Lotus Face and the Fox” by Nghi Vo tells the story of a child, “the fox,” whose hard life on the streets and death of her sister prompts her to abandon her two remaining companions and approach Lotus Face in the hopes that she will grant the fox a wish. Identity, death, purity, and rebirth are symbolized throughout the story by such as the lotus and fox masks the characters wear. Vo presents the reader with a sympathetic character who makes a hard choice out of desperation.

“The Creeping Women” by Christopher Barzak is a retelling of “The Yellow Wallpaper” by Charlotte Perkins Gilman from the perspective of housekeeper Jennie, who also sees the woman in the wallpaper and other mysterious figures on the grounds. Barzak portrays John as an emotionally abusive husband who knowingly antagonizes, gaslights and isolates Jane until she has a psychotic break. As a witness and fellow victim of John’s, Jennie struggles with feelings of hopelessness and guilt until she decides to take action. Jennie’s back story as a homosexual woman blackmailed by her own brother adds welcome depth and clarification to the narrative without being anachronistic. Barzak expertly imagines many new and compelling details while remaining true to the classic. An interview with Barzak is also included in the issue.

“The Sincerity Game” by Brit Mandelo is an intense sexual affair in which both characters are betrayed as inhuman – whether supernatural or simply broken, the text hints at but never clarifies. This story is full of existential questions brought about through the characters’ dishonesty and lack of knowledge.

“The Desert Glassmaker and the Jeweler of Berevyar” by Rose Lemberg is a fun fantasy told in love letters crossing vast distances. Lemberg’s characters are inspired by their admiration of each other’s artistry, and through their flowing language the reader is treated to descriptions of beautiful magic that in some ways mimic the easier communication that we take for granted. This story is about passion tempered by respect and effort.