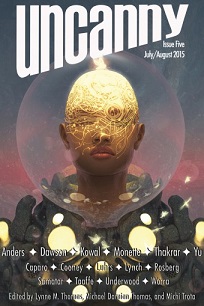 This issue of Uncanny features stories by women writers about female characters, many of whom encounter misogyny, ranging from the subtle and circumstantial to the intense and personal. More than that, each story is simply good fiction, with strong characters who overcome obstacles through bravery and intelligence.

In “Midnight Hour” by Mary Robinette Kowal, the Nameless Queen and her beloved king are under a magical curse in order to save their kingdom from plague. The king suffers insanity for 23 hours of the 24 hour day, and the Queen cannot leave the castle nor speak her own name. When visiting Prince Volis insists on seeing the king, the Nameless Queen must help keep the curse under wraps, lest the valiant prince attempts to save her from the price that she has chosen to pay for the safety of her kingdom. The Nameless Queen is a strong character who affects her own ending despite the efforts of her afflicted husband. Readers will enjoy rich characterization set within a comfortably familiar fantasy trope turned inside out.

“Woman at Exhibition” by E. Lily Yu follows up-and-coming composer Estelle when she goes for a walk because her boyfriend Luke claims to need the apartment to himself. Estelle’s unplanned excursion takes her to an Edward Hopper art exhibit, where the paintings remind her of her life and trigger an uncontrollable urge that takes the story for a surreal turn. Interestingly, Edward Hopper and his wife Jo Hopper are real painters and many of the paintings described are real, as is the flagrant disappearances of Jo’s work described by the curator in the story. Yu draws parallels between Jo and Edward’s tragic relationship and the life of her protagonist, who finds herself as unintentional second-fiddle to her boyfriend simply because of her gender.

In “The Rainbow Flame” by Shveta Thakrar, Rupali carries on the dying tradition of crafting spell candles for the Seers by sacrificing her dreams. When she investigates the Seers’ work, she starts to wonder if the entrenched traditions that proscribe her life are worthy of her loss. In order to set things right, brave Rupali and her mysterious acquaintance Daya must break the well-intentioned ignorance that their elders have constructed around them. “The Rainbow Flame” is a vibrant fantasy with daring characters and heavy southern Asian influence.

Small-time comedian Gloria describes being haunted by the melancholy ghost of her own future self in “Ghost Champagne” by Charlie Jane Anders. Although her boyfriend Raj, her newly engaged mother, and her therapist all try to help her, Gloria’s ghost drives her to distraction and her reactions to her ghost threaten to destroy her professional and personal life. At her mother’s wedding, Gloria confronts her ghost in a desperate bid for self-awareness. Anders writes a character who feels overwhelmed by the past, present, and future who must find the answers within herself.

“The Half-Life of Angels” by Sarah Monette is a very brief piece depicting natural disasters around the world as angels.

In “Catcall” by Delilah S. Dawson, teenager Maria gleefully abandons her attempts to appear unattractive when she discovers that she has a magical power that should terrify creeps and would-be rapists. Her new-found freedom allows her to dress normally and make friends with a nice boy in class. Unfortunately, like society’s convoluted rules governing womens’ attire, Maria’s powers are not as straightforward as they appear to be. The sexual abuse depicted in “Catcall” makes a powerful statement that should not be minimized. Readers should note that, in her interview appearing in this issue, Delilah S. Dawson asserts that these events are real incidences from her own life. Maria discovers her dark side as her safety is threatened again and again in this story of power play and casual violation.