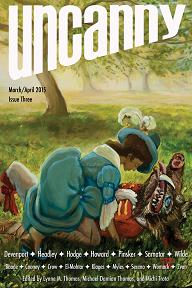 “Those” by Sofia Samatar
“The Lamps Thereof Are Fire and Flames” by Rosamund Hodge
“Translatio Corporis” by Kat Howard
“Ivory Darts, Golden Arrows” by Maria Dahvana Headley
“When the Circus Lights Down” by Sarah Pinsker
“Dr. Polingyouma’s Machine” by Emily Devenport
“You Are Two Point Three Meters from Your Destination” by Fran Wilde

In “Those” by Sofia Samatar, dark-skinned Sarah listens to her elderly white father reminisce about his days on the plantation, before meeting and running off with her mother. While her father mourns his dead racist friend George, Sarah struggles with dreams of darkness and ants that hint at the supernatural. Samatar’s layered tale is purposefully evocative of Heart of Darkness by Joseph Conrad and points out that Sarah’s gender and skin color change the meaning of her father’s myopic story.

“The Lamps Thereof Are Fire and Flames” by Rosamund Hodge is a complex nested fairytale following several generations of queens. Hodge repurposes modern fairytale tropes in a fashion reminiscent of the more morbid Irish myths where fae creatures are truly other. While the nesting form of the story can make it hard to follow, it is worth a second read to appreciate the intricate detail and the origins of the narrator, which only becomes clear towards the end of this moving piece.

Throughout Lena’s life, buildings disappear from our world, leaving vacant lots as if they had never existed. “Translatio Corporis” by Kat Howard tells the story of a misguided magical city that must steal bits of Lena’s body to grow itself in a nowhere place that only Lena can see. Meanwhile, Lena’s best friend Catherine, and numerous doctors, puzzle over the missing body parts that are crippling her. Howard gives us a strong character who makes an empowering choice despite events that seem to spiral out of control. Howard’s use of Catholicism adds depth to a story that encourages the reader to re-examine the interaction of the physical self and the mental or spiritual self.

In “Ivory Darts, Golden Arrows” by Maria Dahvana Headley, Miss Kisseal the postmistress, whose post office is built out of a seashell, delivers a strange letter to a non-existent address at the top of the mountain. This wonderfully imaginative, surrealist piece is full of the hilariously improbable, such as the town of orphan children who live on mail-order cereal. Headley gives her readers a perfectly weird tale for Valentine’s Day.

When the Circus alights in the middle of town in “When the Circus Lights Down” by Sarah Pinsker, the real world falls apart around Haley as people neglect to go to work in favor of going to the Circus. Haley’s mother has always warned her not to get carried away by the river of magical temptation that is the Circus, but as Haley takes her daughter Annie, the delightful magic and the apparent happiness of the performers makes her question if her mother’s alternative of pills and depression is actually better than answering the call of magic on her heart. Pinkster’s tenderly written fantasy gives new meaning to the phrase “running away to join the circus.”

In “Dr. Polingyouma’s Machine” by Emily Devenport, Harris, a janitor with a geology degree, earns an enviable salary working one day a month mopping up fecal matter from a hallway that leads to other whens and possibly other wheres. When her annoying boss, Commander Eaton, foolishly interferes with Harris’ work, Harris must react smartly in order not to upset the deadly aliens who are in charge of the hallway. Devenport puts a more human twist on a classic science fiction trope, keeping the story grounded in the here-and-now even while unimaginably advanced aliens transverse the janitor’s hall. Harris is a smart character who cares about doing her job right, even when that job is scrubbing a hallway and not asking too many questions.

“You Are Two Point Three Meters from Your Destination” by Fran Wilde is an on-point bit of humor that imagines what it would be like to take a GPS into Hades.