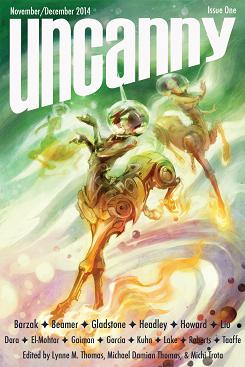 “If You Were a Tiger, I’d Have to Wear White” by Maria Dahvana Headley
“Presence” by Ken Liu
“Late Nights at the Cape and Cane” by Max Gladstone
“Celia and the Conservation of Entropy” by Amelia Beamer
“Migration” by Kat Howard
“The Boy Who Grew Up” by Christopher Barzak

Based on their space-unicorn logo, I was expecting fun and light stories from the first issue of Uncanny Magazine. Instead, the six original stories dealing with a theme of loss were overall pretty dark.

“If You Were a Tiger, I’d Have to Wear White” by Maria Dahvana Headley tells the story of the twilight of Hollywood’s Golden Age. The point of view character is a reporter on assignment at Jungleland. He wants to score an interview with Leo, the lion who opens every MGM movie with his iconic roar. The animals in the story are all intelligent, speaking creatures who once had lucrative careers as actors, but they’re not getting much work and now spend most of their time drinking and despairing. Eventually, the animals are all auctioned off to the highest bidder. There is a moment of brightness at the very end, but overall this story is dark and sad and a bit disturbing.

The main character in “Presence” by Ken Liu rents time on a remote control robot to visit his dying mother in China. He wrestles with guilt for not going in person and performs small tasks with the robot such as cutting his mother’s fingernails. Eventually, she dies and he finds himself unable to mourn until his daughter needs him to cut her fingernails for her. The story is lovely and evocative. It’s written in second person, which is always a challenge and made it difficult for me to get into the story at first.

In “Late Nights at the Cape and Cane” by Max Gladstone, Doc Sinister has thrown off the balance between superheroes and villains by actually managing to snatch a victory out of the jaws of defeat. But he, and Stella, our point of view character and another villain, both know that the potential costs of such a victory are too high. Doc decides to give the trapped reporter’s soul back to the superhero, and balance is restored. There are hints of a neat larger world, but the story itself felt a bit thin.

Celia invents time travel for a school project after discovering a page from her grandfather’s lost novel in “Celia and the Conservation of Entropy” by Amelia Beamer. She learns that multiple versions of her have travelled back to try to save the book. She doesn’t win the science fair, but does decide to do what she can to recreate her grandfather’s novel on her own without travelling back again to save it from the past. The ending fell a bit flat, but this one is a fun, fast-moving story.

“Migration” by Kat Howard is a surreal tale of two women who live as phoenixes—they are reborn in fire and ash every time they die. One of the women is trying to die a final death, while the other is facing that same thing without seeking it. The prose is beautiful, but the story went over my head.

“The Boy Who Grew Up” by Christopher Barzak was my favorite story of the issue. The gay teenage protagonist storms out of the home he shares with his father after yet another fight and runs into Peter Pan in the park. Peter offers to take him for a ride in his nest-like boat, and they end up trapped overnight on an island of birds. The main character finds Peter’s attitude grating, and in the morning, he goes home to face his life, because that’s part of growing up.